This article was a leaflet distributed by Spirit of Eureka at May Day rallies in a number of capital cities. 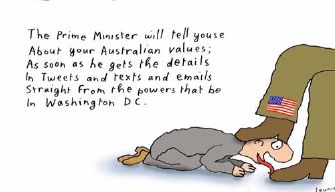 We’re living in dangerous times, under the cloud of a major world war with devastating consequences for people and the environment.

The U.S. has put the world on a course of a major world war.  Military, economic and political tensions between the world’s big powers are building up rapidly in the Middle East, Asia-Pacific and east Europe, threatening all-out war.

The Australian government’s support for US wars and military agendas assists the US in imposing its global hegemony.

Australia is now a prominent US military and intelligence base for its global wars of aggression.  We host thousands of U.S. marines in Northern Territory and several US spy bases, like Pine Gap near Alice Springs.  Australia’s military forces and defence infrastructure and industries are integrated into the U.S. global war machine.

Successive Australian governments have obediently followed orders from the U.S. Commander in Chief (the U.S. President) and submissively supported practically all U.S. foreign policies and wars of aggression – eg. UN vote on nuclear disarmament.  Australia has been rightly described as the U.S. deputy sheriff, and a lackey of the U.S.

With the exception of East Timor, Australia’s involvements in foreign wars have always been at the behest of our imperial masters; first the British colonial empire, and since WW 2 the U.S. imperialists.  Australia has been in almost every U.S. war of aggression that have nothing to do with protecting our security and sovereignty.

It is a fact that the most effective self-defence and security for Australia’s people is a peaceful and independent foreign policy, not subservience to any big power.

It’s an absolute myth that Australia needs the protection of U.S. military alliance.  We can build our own self-defence manufacturing industries to defend our sovereignty and independence, not for servicing U.S. global wars of aggression.

Pulling out of the aggressive US military alliance, upholding Australia’s independence and sovereignty, and building peace and friendship with countries and people in our region, will be the Australian people’s contribution to a more peaceful world.

Australia’s unions have always campaigned and mobilised against Australia’s involvement in imperialist wars of aggression.

It’s because ordinary working people are both the cannon fodder and casualties in the big imperialist profiteers’ wars for natural resources, markets and global domination.  It’s the working people who in our tens of thousands die or left maimed, injured, homeless, living in poverty and hunger in countries devastated by imperialist wars. We are the so-called “collateral damage”, the new sanitized description of mass slaughter.

Australia is servicing U.S. wars of aggression through the upkeep of thousands of U.S. marines in Darwin;  expanding and upgrading Australia’s defence and military infrastructure to accommodate giant U.S. warships, planes, military personnel;  sending thousands of Australian soldiers and military personnel to the Middle East to support U.S. interventions, “regime changes” and military attacks; spending  $ billions on U.S. military offensive equipment that’s designed exclusively for overseas wars of aggression, rather than the self-defence of Australia’s sovereignty.

President Trump recently demanded that U.S. allies increase their defence spending to 2% of their national budgets to pay for U.S. global wars of aggression.  The obsequious and grovelling Australian government unquestioningly obeyed their war mongering master.

The Australian trade union movement has a long and proud history and tradition of campaigning locally and globally for a just and peaceful world.  Australian unions have always been at the forefront and standing with communities campaigning against Australia’s involvement in foreign wars of aggression – the powerful anti-conscription struggles during WW1 in 1916 and 1917;  the 3 month long strike by Port Kembla wharfies in 1937 refusing to load scrap iron on ships bound for Japan for the manufacture of bullets, bombs and weapons; tens of thousands of workers went on strike and took many different industrial actions across the country during massive protests against conscription and the Vietnam War 1966–1972;  campaigns against nuclear weapons;  the transport unions’ bans on transport of uranium, and mass mobilisations by unions and communities against the war on Iraq.

The union movement is again being called on to campaign with communities against Australia’s involvement in wars of aggression and for an independent and peaceful Australian foreign policy.