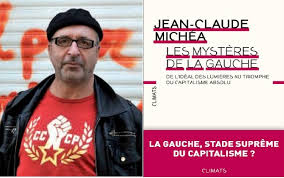 Jean Claude Michéa (b. 1950) is a French philosopher and Left-wing activist who has written extensively on the plight of the European Left since the 1970s. Taking inspiration from George Orwell and others like Rosa Luxemburg, he is well-known in Europe for taking strong positions not only against capitalism, individualism and neoliberalism, but also, and more controversially, for his denunciation of the ‘official’ currents and parties of the Left and their vapid intelligentsia. These, he says, have lost their anti-capitalist convictions and have inevitably distanced themselves from the masses generally and the working class in particular, leading to the growth of the extreme right.

In a recent book, Les mystères de la gauche: de l’idéal des Lumières au triomphe du capitalisme absolu (Paris: Climats,‎ 2013) [The Mysteries of the Left: From Enlightenment Ideals to the Triumph of Total Capitalism], he continues his critique of the Left which, he says, has accepted capitalism and its associated liberal values and has thus become identical to the Right. In addition it tries to hide this betrayal by focusing on ‘societal’ (civil rights) issues rather than ‘social’ (anti-capitalist) struggles that have more meaning for the great mass of working people. Does the Left constitute the final stage of capitalism? Thus the slogan that sums up his position: think with the Left, against the Left’.

The text below are extracts of an interview with Michéa published by the Italian newspaper La Repubblica on 19 december 2015 [http://www.repubblica.it/cultura/2015/12/19/news/jean-claude_miche_a_la_sinistra_deve_rifondare_l_alleanza_illuminista_-129800190/?refresh_ce]; a more extensive transcript of the interview is available in French [http://www.leblancetlenoir.com/2015/12/nous-entrons-dans-la-periode-des-catastrophes.html]. The extracts from the Italian and the French texts have been translated by me.

«Repubblica: Does the recent performance of the National Front at the regional elections surprise you?
Jean-Claude Michéa. Actually, there is nothing more logical than the increase in the popular vote for the National Front. This is not only because the official Left strongly supports the market economy (with the Leftist faction, for its part, only questioning neoliberal ‘excesses’); but, like Pasolini already pointed out, it seems to take pride in enthusiastically celebrating all the moral and cultural consequences of the market. This makes someone like Marine Le Pen [leader of the French National Front] very happy and, having rejected the reaganism of her father, she now has the luxury of quoting Marx, Jaurès or Gramsci! Of course, her nationalist critique of global capitalism is never very smart or philosophically coherent; but she’s the only person in France’s current intellectual desert who is in touch with the lived experience of the masses. If we can’t effect a cultural revolution similar to that of the Spanish movement Podemos, the National Front is going to do well.

Repubblica: How do you explain this evolution of the Left?
Jean-Claude Michéa. What is now called ‘the Left’ is a product of a defensive agreement established at the beginning of the 20th century to ward off the reactionary Right made up of nationalists and the Church: essentially, between the major currents of the socialist movement and the liberal and republican forces claiming to be the inheritors of the principles of 1789 and of the Enlightenment.  Like Rosa Luxemburg exposed in her articles on the Dreyfus Affair [in France, c. 1900] it was a rather ambiguous alliance which made possible numerous liberation struggles right up to the 1960s.  But once the final vestiges of the ancien régime were eliminated, this alliance could only result in the defeat of one or the other of the parties in the union. This is precisely what happened in the 1970s, when the Left intelligentsia headed by Michel Foucault and Bernard-Henri Levy became convinced that the socialist project was essentially ‘totalitarian’. From there, the European Left has progressively withdrawn to the liberal position of Adam Smith and Milton Friedman and has abandoned any idea of worker emancipation. And today it’s paying the electoral price.

Repubblica: In what sense has what you call the ‘metaphysics of progress’ led the Left to an acceptance of capitalism?
Jean-Claude Michéa. The idea of progress is founded on the idea that ‘History has a direction’ and that every step forward is always a step in the right direction. This idea was very effective so long as the struggle was against the ancien régime.  The problem is that capitalism is of a different nature, in that it knows ‘no natural or moral limits’ (Marx);it is a dynamic system with a logic of gradual colonisation of the globe and all aspects of human life. Thus the ‘forces of progress’ end up focusing only on the ‘old world’ and the ‘forces of the past’, which make a critique of liberal modernity more and more difficult, and conflate, as is the case currently, the idea that ‘you can’t stop progress’ with ‘you can’t stop capitalism’.

Repubblica: In this situation, how can the Left continue to differentiate itself from the Right?
Jean-Claude Michéa. Once the official Left was convinced that capitalism was a point that could not be surpassed in our time, it was inevitable that its economic programme became less and less indistinguishable from that of the liberal Right. Thus, for the last 30 years, it has sought out the new middle classes through the adoption of a cultural liberalism, that is, the acceptance of a permanent struggle against the ‘taboos’ of the past.

Of course, this ignores the fact that capitalism constitutes a ‘social totality’. If the key to economic liberalism is, first of all, as Hayek stated, the right of each person to ‘produce, sell and buy everything that can be produced and sold’ (whether it is drugs, chemical weapons, sexual services or the womb of a surrogate mother), one has to conclude logically that it cannot tolerate any limit or any ‘taboo’. This actually leads, according to Marx’s famous phrase, to the drowning of all human values ‘in the glacial waters of selfish calculation’.

Thus if we follow George Orwell and accept that, unlike our political, economic and cultural elites, the masses are still attached to moral values such as those that promote civil society and the sense of mutual aid, you can easily see the reason for their lack of enthusiasm for the modern Left’s drift towards liberalism. This obviously doesn’t mean that we should ignore what are called ‘societal’ issues (such as racism or homophobia). But it is sufficient to have seen the marvellous film of Matthew Warchus, Pride, to understand that battles of this type are only effective when they are articulated into the realities of mass struggles. The modern Left has completely lost the secret of this articulation.

Repubblica: You believe that the Left’s acceptance of capitalism has been a mistake. But others could see it evidence of its realism.
Jean-Claude Michéa. The final stage of capitalism, wrote Rosa Luxemburg in 1913, will see a period of ‘catastrophes’. It would be hard to describe the period we are entering better. Moral and cultural catastrophes, because no community is sustainable on the basis of ‘every man for himself’ and the pursuit of ‘self-interest’. Environmental catastrophes, because the idea of infinite material progress in a finite world is the craziest idea that has ever been conceived. Economic and financial catastrophes, because the accumulation of capital on a global scale (i.e. ‘growth’) is going to come up against what Marx called its ‘internal boundary’; in other words, the contradiction between the fact that the source of all added value and therefore of profit  is living labour, and the contrary trend of capitalism that results from global competition, namely to increase productivity by ceaselessly replacing labour with machines, computers and robots. The fact that the ‘industries of the future’ create few jobs thoroughly confirms Marx’s analysis.

There was a time when the neoliberals thought they could overcome this contradiction by imagining, from the beginning of the 1980s, a new type of growth, with a deregulated financial industry constituting the main driver. The result has been that the volume of global financial capital is already more than 20 times greater than global GDP. This means that the ‘debt problem’ has become completely insoluble, and we now have the greatest speculative bubble in history which will burst despite any growth in the ‘real economy’. We are therefore going very fast towards what Rousseau predicted, that ‘humanity will perish if it can’t change its behaviour’.

Repubblica: In this situation, why do you think it necessary ‘to think with the Left against the Left’?
Jean-Claude Michéa. The major strength of the original socialist critique was that it had understood, from the dawn of the industrial revolution, that a social system only geared toward the search for private profit would inevitably lead humanity to an impasse. Paradoxically, it is at the very moment when this system is starting to crack under the weight of its own contradictions that the European Left has chosen to reconcile itself with it, and to consider as ‘archaic’ any critique that has any radical elements. It would have been really hard to bet on a worse horse! It is therefore urgent today ‘to think with the Left against the Left’.»