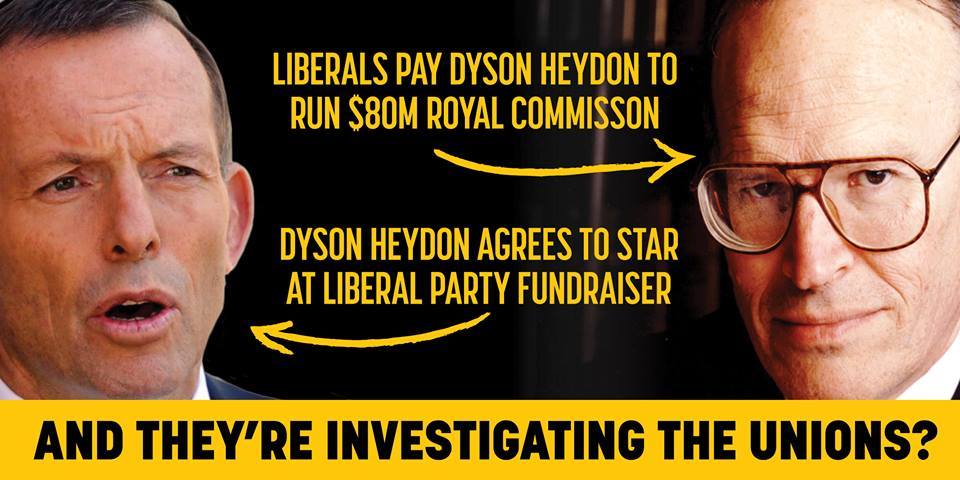 RULE THREE:  RIG HIS TERMS OF REFERENCE  –  blind your boy to criminal bosses

See no evil in Grocon.  Hear no evil of Transfield.  Speak no evil of Boral.

Dyson Heydon is the most extreme right-winger ever on the High Court. And that’s saying something given some of the reactionary swine there since 1903.

1996: Howard on the hunt for Big-C Conservatives to stack the High Court.

30 October 2002: Heydon touts for a spot on the bench with a speech to the ratty right-wing monthly, Quadrant. It had been set up in the 1950s by the U.S. Central Intelligence Agency. With Howard in the audience, Heydon accuses the High Court of destroying ‘the rule of law’. He opposed providing counsel for the accused in murder trials.

December 2002: Howard unleashes Heydon as the bosses’ latest judicial attack dog on. On the bench, Heydon does everything his masters want.  He interprets the ‘rule of law’ to mean that rulers can do whatever they like.

2013: He takes the cake for the highest rate of dissent on the Court; always taking the most extreme reactionary line.

October 2013: Retires, pissed off that Howard lost in 2007 and so could not appoint him him Chief Justice.

He takes out his frustrations in a stream of abuse against his fellow right-wing judges as ‘overbearing’ and ‘The enemy within’. His picture of them as ‘utterly confident of their own ability, pretty sure that no other judge has yet grasped the key point’ is an exact self-portrait.

April 2014: Sucks up to Abbott with a speech to the ultra-right think-tank, the Centre of so-called Independent Studies which is totally dependent on the big end of town. Heydon claims that criticism of Abbott’s religious prejudices is like Nazi attacks on Jews.

June 2016: Queen’s Birthday Honours: Heydon becomes ‘Panto Dame’ Dyson for his services to the arse-licking of Liberal leaders and to the boss-class.

Question: Is Heydon’s hypocrisy and foul-mouthed arrogance huge enough for his Report to attack workers for using the f-word?