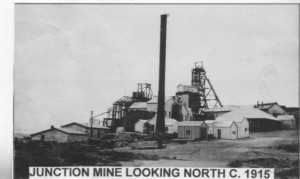 By 1909, a German firm, Metallgesellschaft dominated the world trade in lead and zinc. This cartel therefore sold almost all the ore produced at Broken Hill. The Germans had set up a subsidiary here in 1897, which became part of a ‘Trio’ of German companies which tied up most of the Broken Hill companies in long-term contracts. For instance, BHP had signed up to sell through the cartel until 1921. In addition, BHP had more German shareholders than British.

The real power of the German firms came from their advances in metallurgy. Technological superiority over the British firms meant that the cartel could offer the best prices. In keeping with the turn to Finanzkapital from free trade imperialism of the British, Metallgesellschaft formed the Metallbank in 1906. Together they were the third largest firm in Germany.

British capitalists fought back. Their local allies became known as the Collins House Group. From nothing in 1905, the member companies owned the three richest mines on the field. They had no smelter and so were tied to the German cartel almost as much as were BHP.

War broke out on the ground and in boardrooms. In London, the family in control of Metallgesellshaft, the Mertons of Frankfurt, anglicised their directorship. Only British subjects could join – but most were naturalised Germans. Step two was to keep the trade in their hands. The London subsidiary now handled all the metals. Every bullet fired by either side would add to the profit of the German conglomerate.

The Mertons had taken charge of the US supplies, along with those from Spain. But the upheaval of war gave the Guggenheim-Morgan concern its chance to break into the world market without the cartel.

A new front opened in September with newspaper articles alleging that the metals trade was German stronghold. The cover-up worked – for the time being. The British government could find no evidence that Frankfurt bought or sold the metals in the hands of the Merton’s London arm. 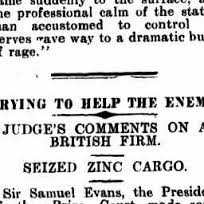 The propaganda war reached Australia in October. ‘Is it British?’ headlined an article about BHP. The Mining Standard wanted to know whether BHP was free to sell its lead to British firms? Was it a British firm or German one with British connections?

The Military raided the Collins House Group on 8 November 1914. A ‘Trading with the Enemy Act’ had been made retrospective. The raid yielded no proof against the Group. Perhaps they should have raided BHP.

Attorney-General Hughes made up for the lack of hard evidence with rhetoric and insinuations. His state socialist outlook meant that he knew that with millions at stake, the firms could not be trusted. As he had written in the recent election campaign: ‘If you can’t trust capitalists to supply clean milk to babies, what can you trust them to do?’

Collins House wanted to escape from the cartel but they could not go it alone as the Americans had. BHP feared that any rupture would greatly harm the business. BHP’s London directors signed a new Lead Convention on 18 February. One result was that a British firm protested to Hughes that they could not buy ore from BHP. The cartel again did a sidestep by releasing BHP from the Convention so long as they continued to behave as if it existed.

Ducking for cover did BHP no good. Its camouflage operations convinced him that they would never sever their links to the Hun unless he made them. In May 1915, he pushed an Enemy Contracts Annulment Bill. Not all the Imperial Patriots approved. Loyalty to the King-Emperor was all very well but what about the sanctity of contracts?

Hughes’s attack was reinforced when the Secretary of State for War, Lord Kitchener, publicised the chronic shortage of ammunition. The cartel’s competitors were not slow to allege that the Enemy metal traders were holding back essential supplies. But the tougher law had little effect. Not a single contract was submitted for annulment. Hughes struck again. He declared one of the smaller firms in the Trio to be an enemy agency. Its manager was interned. BHP and Collins House at last answered the call.

None of the capitalists’ performance would have surprised Jack Simpson, shot on 19 May as he brought another workmate through Shrapnel Gully. He had written to his mother: ‘I often wonder when the working men of England will wake up and see things as other people see them. What they want is a good revolution and that will clear some of these Millionaires and lords and Dukes out of it.’

Drawn from Frank Carrigan, ‘The Imperial Struggle for Control of the Broken Hill Base-Metal Industry, 1914-1915’, Essays in the Political Economy of Australian Capitalism, volume 5, 1983, pp. 164-86.

Carrigan concludes: ‘Only the establishment of socialism promises a future in Australia free from the shackles of imperialism and war.’