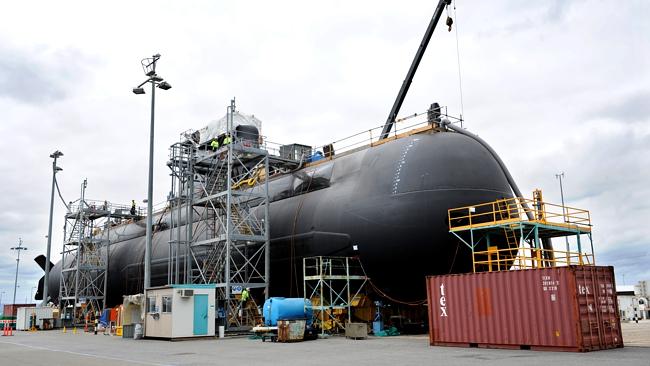 This article was a leaflet produced by Spirit of Eureka in South Australia and handed out to the workers at the Australian Submarine Corporation in Osborne, Port Adelaide. Hundreds of leaflets were distributed to a very receptive and young workforce.

The Abbott Government’s “competitive evaluation process” (CEP) for the construction of new submarines is an unacceptable insult.

It is an insult to all – not least Sen. Edwards – who genuinely believed Abbott had had a change of heart.

They are just weasel words to get around what should be an open tender process for a local build.

The CEP does nothing to dispel claims raised in the West Australian newspaper and elsewhere that a secret deal had been made by Abbott to give the work to the Japanese.

A tender process has defined procedures and value for money criteria.  A CEP involves criteria other than those used in an open tender process.

An embarrassed Sen. Edwards nailed it when he said on Tuesday, “They call it competitive evaluation: it’s tied up with defence and the secret squirrel business…”

The “secret squirrel business” will be a set of additional criteria which the public may never get to see but which are likely to be framed in terms of “international alliance obligations” and “strengthening defence partnerships”.

What this means is that the skill and ability of an Australian workforce to build new generation submarines will be ignored in favour of whatever the US wants.

The US has successfully pushed the Australian government to scuttle plans to build 12 new submarines here.  Instead, they have argued that a model based on Mitsubishi and Kawasaki’s Soryu-class vessels will better serve the needs of naval interoperability.

In a Reuters report last November, senior US commanders were quoted as saying that the US would “welcome Canberra’s purchase of Japanese submarines because of the increased interoperability it would give the three navies”.

Interoperability basically means that the US imperialists know down to the last detail the capabilities and limitations of its own and its allies’ submarines, and that it has seamless use of technologies for communications and cryptography.  Issues around communications can be the most serious in preventing effective interoperability.  To ensure effective digital information exchange, including electronic counter measures, requires highly standardised, or interoperable, enabling systems.  The US objective is to standardise communications protocols for allied operations.

The US regards it as to its own advantage that Japan and Australia share a common submarine design. Given that the Japanese military would not snub Mitsubishi and Kawasaki to purchase an Australian manufactured submarine, it makes sense for them that Australia purchases the Japanese Soryu-class vessels.

Re-establishing Japan as an arms exporter

The US wants to dominate the Pacific but they want their regional allies to more actively involve themselves in this exercise.  As a carrot for the Japanese militarists to share the task of maintaining US domination, the US is working to realise Japanese PM Shinzo Abe’s dream of re-establishing Japan as an arms exporter.  Half a century after a defeated Japan adopted a pacifist constitution, Abe has ended a ban on Japanese weapons exports.  Abe needs major contracts with clean, respectable and stable customers to make this acceptable to the Japanese people.  Australia fits the bill and the tens of billions of Australian dollars that would boost Japanese military manufacturing reflect a higher strategic priority for US imperialism than the investment of the same money in Australia.

Build on experiences with the Collins class

Contrary to the repeated denigration of the Collins class submarines by journalists keen to justify the Japanese option, retired RAN Rear-Admiral Peter Briggs expresses confidence in the experiences gained through the Collins project.  In a paper released on January 21, the submarine specialist maintains that the “Collins project has been much maligned in the media, but an objective look at the program provides both valuable lessons and encouragement that the future submarine can be successfully built in Australia”.

US has no loyalty to a client state

The Americans have no particular loyalty to their client states.  Despite the very real importance to Australian workers and manufacturers of keeping submarine production here, the US is prepared to sacrifice Australian manufacturing on the altar of a revived Japanese war machine.

It all illustrates the need for a genuine commitment to Australia’s independence that can only come about through the active leadership of the Australian working class.

Workers have to lead the fight

The workers who are best positioned to lead the argument for a local build are those currently employed by the ASC.

Find ways to get involved in the debate: resolutions on the job; calls for support from other union and community organisations; more delegations to Federal and State politicians; social and mass media.  Make banners and have a presence at events like March in March (Sunday March 22) and May Day.

You know your skills and your strengths.