This article was a Spirit of Eureka leaflet that was given out in a number of capital cities at the March in March rallies on Sunday, 16th March.

The right to elected political representation is dear to all Australians. 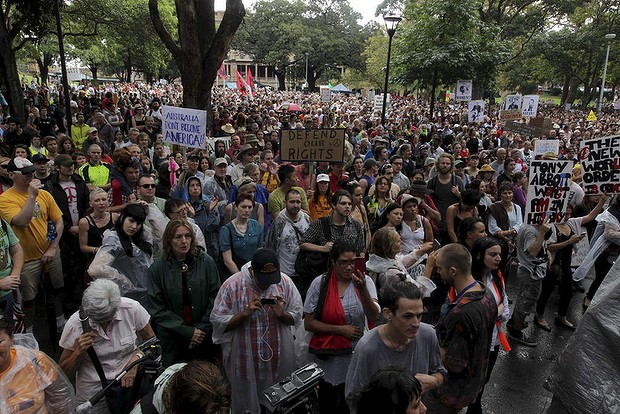 We want good government that brings benefits to us as a people.

But we are continually frustrated by a recurring electoral cycle of hope that Labor will do the right thing by its electoral base; frustration and anger when it gets into office and betrays those hopes; an electoral win for the conservatives; and then a return to the hope that Labor gets re-elected and can be trusted….”this time”.

We live in a country where you and I and Clive Palmer and the CEO of Qantas all have one vote.

But the reality of property ownership under capitalism means that we are fated to be a client state of “big and powerful friends”; that there is a mismatch between our existent political democracy and our non-existent economic democracy; that we do have a ruling class that exercises continuing  power regardless of which political party gets into temporary office.

We can only break out of this self-defeating cycle of electoral hope and despair when we make some basic and fundamental changes in this country.

Firstly, we must properly address the original sin of the colonial unsettling of the continent’s First Peoples.  This requires a Treaty between the Australian government and Aboriginal and Torres Strait Islanders.  That Treaty must acknowledge more than the prior existence of ATSI peoples.  It must recognise that they exercised prior occupancy, custodianship and ownership of the continent.  It must acknowledge that the unsettling of their relationship to country was a crime that occurred through violence or the threat of violence. It must acknowledge their inalienable right, through their communities, to Land Rights and to self-determination.

Secondly, we must jettison the Constitution, that weak and obstructive compromise between the British imperialists, the separate colonial elites and the developing forces of nationhood.  A new Constitution must be republican, democratic and national.

Thirdly, we must have our rights and liberties – those catch-cries of the Eureka Stockade – enshrined in a Bill of Rights.  Human rights in Australia are poorly defined and not well protected.  International conventions and treaties on human rights to which Australia is a signatory are not enforceable under Australian law. The Bill of Rights must be located within the new Constitution and not be subject to the whims of the government of the day.

Fourthly, we must decisively reject the suffocating embrace of the neo-liberal agenda.  We stand for the restoration of the social purpose of government.  The so-called “free market”, dominated by imperialist finance capital, leads directly to the path of nation-wrecking.  Why should the Board of Qantas, for example, not be sacked and the company renationalised?  We are an island nation that requires the security of controlling the means by which our citizens may depart from or return to the country.  We cannot place ourselves at the commercial or political mercy of foreign-owned carriers.

Fifthly, we must prioritise the five pillars of our people’s livelihood as the foundation of good government.  They are housing, transport, health, education (public and free), and employment.  The prioritising of the needs of capital by both major parties must stop.  Capital can either be harnessed for social purposes or be freed to wreak a destructive path through our people and our communities.  Our agenda for these five pillars will be built in the suburbs of the working people through strong community organisations committed to a long-term alternative form of service provision.

The spirit of Eureka is one of defiance of out-dated and self-serving power structures.

The spirit of Eureka is one of struggling against the odds for extending democracy and justice to all.

The spirit of Eureka is one that stands for a just, democratic and sovereign Australian republic.

“I call on my fellow diggers, irrespective of nationality, religion or colour, to salute the ‘Southern Cross’ as the refuge of all oppressed from all countries on earth.”    (Rafaello Carboni, November 1854)

“We swear by the Southern Cross to stand truly by each other and fight to defend our rights and liberties.” (Eureka rebels’ oath, November 1854)