The information below is a flier produced by SPAG (Single Parents Action Group) and SIMPla (Stop Income Management in Playford, South Australia), and distributed at a protest outside Nick Champion’s electoral office on 20th May.

If you would like further information about any of the issues mentioned, or to get involved, contact Sherre Clay on 0423 041 443 or Pas Forgione at pas.forgione@yahoo.com

Heard about Compulsory Income Management? It’s being “trialled” in Playford. People on welfare payments considered “vulnerable” by Centrelink or referred by child-protection agencies will be forced onto the scheme.

They’ll have 50-70 percent of their payments put onto the BasicsCard (people can also volunteer). It’s claimed Compulsory Income Management will improve health and financial situations, by ensuring payments are spent on “essentials”.

But there’s NO EVIDENCE the policy works! In fact, the humiliation it causes could damage their mental health. It wastes money that could provide more education, employment, health, and financial counselling services.

It’s an unjust, heavy-handed, and an attack on the right of those on welfare payments to control their payments – and on the safety-net we all need during difficult times.

The Federal Government and Opposition have made no secret of the fact they want Compulsory Income Management extended to the whole country, and other categories of people on welfare payments, like “Disengaged Youth” and “Long-Term Welfare Recipients”.

Compulsory Income Management began in the NT in 2007 as a “trial” but has lasted over five years – despite widespread opposition and no evidence the policy works.

Compulsory Income Management? No, This Is Spending Control! A Fake Solution To Real Problems! SAY NO!

Nick Champion lobbied the federal government to include the city of Playford in its Income Management trials (the BasicsCard.)

The Labor government have not put any protections in place for the income management trials meaning there is a loop hole for Tony Abbott to be able to walk in and place whoever he wants on income management without having to pass it through the senate.

Nick Champion is a Strong supporter of The Teen Mums Trial in Playford (The Live Learn Grow Program) where 1 in 3 teen mothers are being cut from their payments in Playford because they refuse to part with their 6 month old babies to return to full time study and be charged the increased JET rate for childcare.

Nick Champion refused to back the $50 raise to Newstart saying “the best form of welfare is a job.”

Nick Champion refused to acknowledge at a meeting with Terese Edwards CEO of NCSMC and Sherree Clay state coordinator for SPAG being that 90% of single parents are women that the cuts to parenting payment were discriminative towards women and an attack on women’s rights.

When the issue of human rights was raised to Nick Champion he stated that activists always raise the issues of human rights and they are simply an excuse used to get out of social and employment obligations. 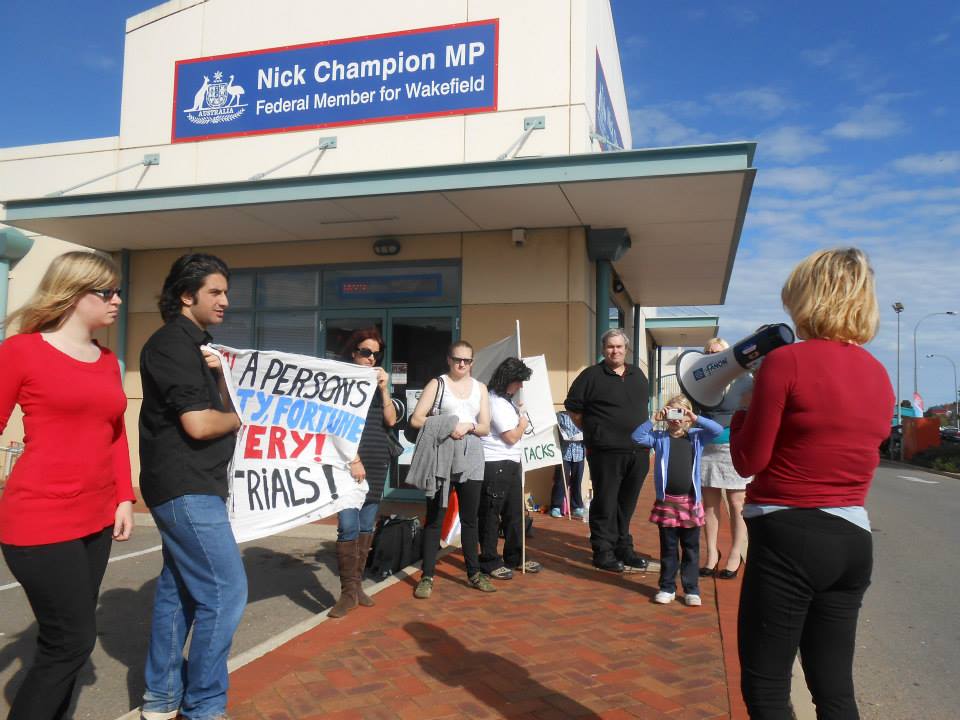 No To Newstart – Parenting Payment For Parents

At the beginning of this year, the Federal Government following on from the Howard government cut payments to 84,000 single parent families; pushing families who already were struggling every day further into financial despair. The new reality of $35 a day means constantly choosing between essentials – fresh vegetables, paying the electricity bill or new school shoes.

87% of Australian single parents worked or studied at the time that the changes went through – the government claimed these cuts were an incentive for single parents to work; these payments are not any incentive to get people into work but punishment for being a single parent.

Those that were studying have had to choose, continue to study and go without further, or give up and try to find some form of employment. This has happened because of the cut to the Pensioner Education Payment no longer being available and the increase in price of JET childcare by 1000% making it impossible for parents who were students to afford childcare.

Since the cuts, thousands of families have been pushed deeper into poverty. Many of those who have work find themselves in insecure, casual employment — the only jobs available for those needing flexible hours for their children. Childcare costs have also risen, and the chances of finding a placement are very slim, in many cases, before/after school care is non-existent, and this leads the parent to on some occasions leave a child at home alone.

The UN Special Rapporteur on Extreme Poverty and Human Rights and the UN Working Group on Discrimination against Women have expressed serious concerns that cuts to payments to single parents may be a violation of Australia’s international human rights obligations. A letter was sent to the Australian Government back in October 2012, the government has never responded.

Nick Champion has stated that the best form of welfare is a job and refused to back the $50 a week raise to Newstart. We need to tell him we do not accept this decision. The electorate of Wakefield has the second largest population of single parents in Australia, many struggling families in the electorate of Wakefield could have benefited from the 50 dollar raise to Newstart.