There’s a new educational expert on the block. He delivered the 2008 Boyer Lecture, addressed the G8 on “Education the Last Frontier”, telling of the need for revolutionary change in our public schools. He explained his plans to Kevin in ’07, and to Julia every year since. He introduced them to his guru Joel Klein, ex-head of NY schools who Julia dutifully wheeled around Australia in late 2008. 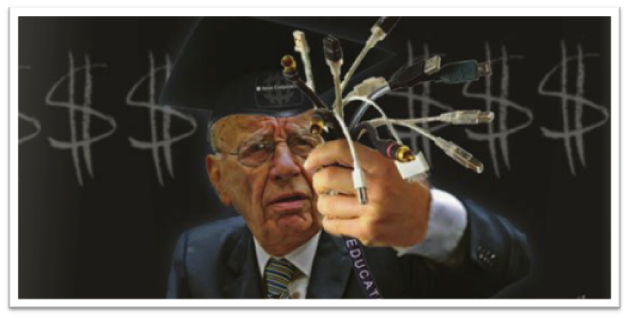 He says of schools, “We know the old answer- simply throwing money at the problem – doesn’t work…The reason? More money has fed a system that is no longer designed to educate – it’s become a jobs program for teachers and administrators.” He praises Sweden’s so-called IKEA schools, whose head honcho says, “If we’re religious about anything, it’s standardisation. We tell our teachers it’s more important to do things the same way, than to do them well.” And he reckons our kids can be taught online from India.

His name’s Rupert Murdoch an he’s openly stated that his News Educational that Klein now runs is after the provision of online education that’s worth $500 billion dollars in the US alone.  Other transnational corporations have their eyes on this prize too. Walmart has plenty of US charter school action – why not here as well?

‘Local shame local blame’ and the attacks on TAFE are O’Farrell’s implementation of this agenda. So when someone asks why policies that harm kids are being implemented, and says that it doesn’t make sense, here’s your answer.

O’Farrell’s government is our immediate target. His politicians use lots of pretty words, some written by our old mate Michael Coutts-Trotter, now head of Finance, but they’re preparing for in an increasingly deindustrialised Australia, with residualised public education, where public school kids are expendable, because they’ll be the casualised, unemployed or underemployed workers of the future, who don’t need a rich education, who don’t need to be able to think and stand up for themselves, who just need narrow training and to do as they’re told.

Our young people deserve a better future. They deserve genuine democracy in a truly independent country, run for the benefit of the Australian people not the owners of giant transnational corporations. That’s the background to our fight. We have every chance of winning.