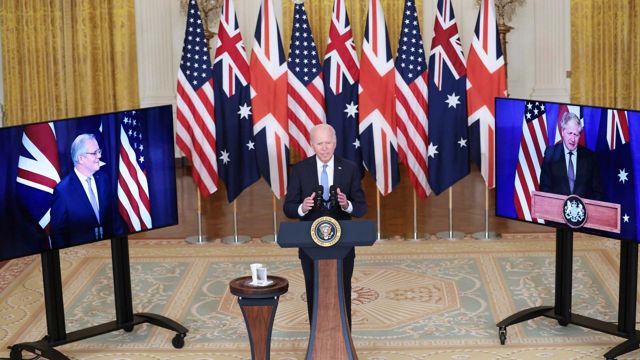 The announcement of the AUKUS pact and the possible nuclear submarines deal covers more than it exposes. What it distracts from is the military build-up already underway in the “Top End”, the increased visits of US planes and warships, and what US bases expert Professor Richard Tanter has called turning Australia itself into a US base. These are a product of the Australia-US ministerial talks in June 2021 (AUSMIN). Still, what AUKUS does signal is a pact openly threatening China, under the tight control of the US. It is an extension of the US Pivot into Asia Pacific publicly announced in 2010-2011. AUKUS is not in fact a recent development.

The subs and jobs

The now-cancelled French submarines deal promised many jobs in Adelaide (highest consistent unemployment state in Australia), but there were persistent disputes between the two countries over how much work would in reality be transferred from long-established production lines. This is even more the case with the US subs – because they use weapons-grade uranium fuel and nuclear weapons under US builds, and because US multinational corporation General Dynamics has even longer-established production processes in its two shipyards in Virginia and Connecticut.  Knowledgeable commentators doubt any meaningful work will be transferred, and if it is will take 15-20 years to be set up (training, safety and security provisions mostly). Military-industrial jobs such as these are the most expensive (in government subsidies) of all – much better jobs are possible meeting the real needs of the Australian people (e.g. health, education, renewables, housing).

And twenty years from now such subs would be obsolete. This is a furphy, a cruel hoax on Australian workers and the Australian people.

Much more likely is Australian ‘leasing’ of US subs, as suggested by defence minister Dutton – but Australia is short of submariners for it’s existing Collins-class subs, never mind the much larger US ones. So what is likely to happen is outlined by former PM Turnbull – I could see the United States saying, “Yeah, we’re very happy to have Australian crew embedded on Virginia-class submarines from a training point of view.” But, just, there’s no way that would give us sovereign capability.

In other words, US navy officers would control both the nuclear reactors and the weapons launching – US subs in all but name. But Australia would pay for them.

The subs proposal is already stirring up the nuclear-power lobby – in political parties, in the bureaucracy and in big business. This is a very expensive, dangerous and low provider of jobs, which has made no real advances in safe storage of nuclear waste – any chances such waste generated by these subs would be returned to the US?! The reactors don’t need to be refuelled, but they do need to be cleaned and maintained, which itself requires a small-scale nuclear industry – a significant nuclear wedge for spruikers. Malcolm Turnbull agrees – he has warned Australia will need to develop a nuclear industry to maintain its proposed fleet of submarines.

Leasing US subs would lead to strong pressure from the US to install nuclear weapons with time. They would also make Australia a bigger nuclear target – particularly Stirling RAN base near Perth, through increased US and British nuclear subs visits would do the same in other Australia ports (see below).

Most Australians oppose both the nuclear industry and Australian deployment of nuclear weapons – but the subs deal and other US alliance developments will bring such outcomes much closer.

Nuclear subs are not either quieter or stealthier than diesel-powered versions like the French deal or the Collins class (despite lies to the contrary). What they are better for is for long-range, offensive deployment – not for defending Australia but supporting US deployment in places like the South China Sea. These nuclear submarines will play their part in blockading and attacking the Chinese navy off their coast. This threatens China’s second-strike-capable ballistic missile subs and so makes nuclear war more likely. And beyond the subs deal itself,  AUKUS and the agreements at the Australia-US ministerial talks in June (AUSMIN) will increase significantly US Marines rotations and number at Darwin, and US and British access to Australian airfields and ports (and the “neither confirm nor deny” nuclear weapons policies of the US means almost certainly we will be hosting such weapons even more). The $1.4 billion upgrade to RAAF Tindal south of Darwin allows refuelling and increased visits by US nuclear-capable long-range bombers such as the B-52 and the B1 – which can reach Southern China directly.

Also encouraged in US-Australian agreements is the research and development of new technology – such as cyber-warfare, space, undersea drones, and generally what have been called killer-robots. This means further integration into US war plans.

Pine Gap will become even more important in war-fighting (for both drone communication and nuclear missile targeting) as a result of AUKUS/AUSMIN – the most important US base outside of the US itself, and a high-priority nuclear target.

Former chief of staff and ministerial adviser to the Minister for Defence Mike Scrafton writing about the AUSMIN agreements said:

Australia has effectively surrendered its right to say what kinds of military platforms and weapons can be brought on to, or stationed in, its territory…..This represents a complete and total subordination of Australia’s interests to those of America. It is not possible to say no to America when so deeply entwined with US military war preparations.

And so Australia is becoming a prime launching pad for US war, as well as a front-line target for US enemies – not only China but their de-facto ally Russia as well (the second-biggest nuclear weapons power on the globe).

It is no exaggeration to argue that the AUKUS pact has sacrificed Australia’s defence for America’s offensive war against China. Australia in the future will have no submarines to defend the country’s coast line as a result of the cancelled French subs. Australia needs a genuine defensive defence – forces and strategies that make it very formidable to attack, but don’t threaten other nations. This is possible and very much needed – but requires a clear break from the US alliance.

AUKUS and the nuclear subs deal has already increased tensions with our neighbours in the Pacific  and South-East Asia. The Pacific already has a terrible nuclear history with multiple US and French nuclear tests (more than 300) and resulting uninhabitable islands, as well as many victims of fallout and waste.  Its small, poor and vulnerable states don’t want to be dragged into major powers’ confrontations and wars, as happened in WW2.

Above all they want climate change (CC) addressed – all nations are vulnerable, and low-lying island-states such as Tuvalu and Kiribati may effectively disappear. Australia is already on the nose due to this country’s very weak CC policies. Nuclear-free Aotearoa/New Zealand is held in much higher regard – and it has made clear it will not change it’s long-standing policies of not allowing nuclear subs into it’s waters and ports. Australia would do well to follow this lead, which would be in line with being a signatory to the Nuclear Non-Proliferation Pact. In fact the nuclear subs deal could constitute non-compliance with this pact – though major powers who have signed it also ignore it.

SE Asian states like Malaysia and Indonesia have reacted with alarm to AUKUS and the subs proposals – they fear a regional arms race and being forced to choose sides between the US and China, as well as the likelihood of Australia reinforcing it’s so-called deputy sheriff role for the US.

Australia needs instead to create a much more independent foreign policy and develop stronger political, aid and trade ties with Asia Pacific, to become better neighbours rather than threatening with nuclear subs roaming secretly around its waters. Former PM Keating has advocated strongly for this since the AUKUS pact was announced (though he did nothing much to lessen our dependence on the US whilst in office). Over several years foreign aid has been slashed – the billions devoted to weapons purchasing and weapons export industries show clearly our aggressive priorities.

The French subs builder has put in an ambit claim for $66 billion as compensation for the cancelled contract. Even if this is greatly reduced, a project that has already wasted several billions will now cost billions more. Whether the leasing or build/buy pathway is chosen for the US subs (or both), PM Morrison has already said the bill will be more than the $90 billions the French contract was slated to cost. Every major military-industrial contract blows out by many billions from the original estimate – the very dubious F-35 joint strike fighter is a notorious example. So there may well be billions more to come – on top of the unknown but no doubt major costs of further weapons purchases to satisfy the demand for ‘interoperability’ with US equipment and ammunition.

All this while the real needs of the Australian people are neglected – social welfare is frozen, the health system is creaking under the burden of the pandemic, education is floundering (except for rich private institutions), and the federal government prefers to throw buckets of cash at corporate fossil fuels subsidies, from coal to gas to diesel, rather than meet our global and national needs in honestly addressing climate change.

We are hearing louder and louder drums driving towards war with China. This is all about controlled panic over the accelerating decline of the US empire in competition with China. Because of this, the US is demanding more and more from their allies – more economic burdens, more political commitments and more military contributions. Australia is a prime target – no other US ally is as cringingly-obedient (Coalition and ALP) and geo-strategically useful – Pine Gap, NW Cape, the “Top End” and all. AUKUS is just a modern variant on the US alliance, and the associated military build-up is leading to the loss of what independence we have in political, military and economic terms. We are already hosts to too many major and highly profitable (mostly US) military-industrial corporations, and they use well-worn ‘agents of influence’ to lobby successfully for more military spending, more kow-towing to the US, and more aggression towards China. These agents include much of the mass-media, (especially Murdoch’s), and the Australian Strategic Policy Institute (ASPI), which is grotesquely treated as some sort of neutral expert on foreign and defence policy, despite being funded by military-industrial corporations and the Australian and US governments.

Not that China should be given a free-pass: they are driving their own economic interests through the multi-billion “Belt and Road” plans. But they are still our biggest trade partner, and cautious wariness of their challenges to independent policies need to be distinguished from adding to the increasingly-hysterical war-mongering of the US – the main threat to peace. After all, China is winning economically – they don’t need to resort to armed conflict. However they should respect the sovereignty of other countries bordering Sthe outh China Sea and engage in peaceful resolution of their territorial conflicts. The US and Australia have no right to interfere – they aren’t ‘locals’.

Under both major parties Australia would be automatically dragged into any US-China conflict with no say by the government, parliament or the people. But only the Australian people can change this, through support for the anti-war and anti-nuclear movements, and those movements putting the environment, welfare and other real interests first. There can be no future at all with the US alliance, or else a future independent republic with an independent foreign policy based on peace with justice.