An open letter to the NSW and Federal Governments: Genuine community engagement is key to controlling Covid 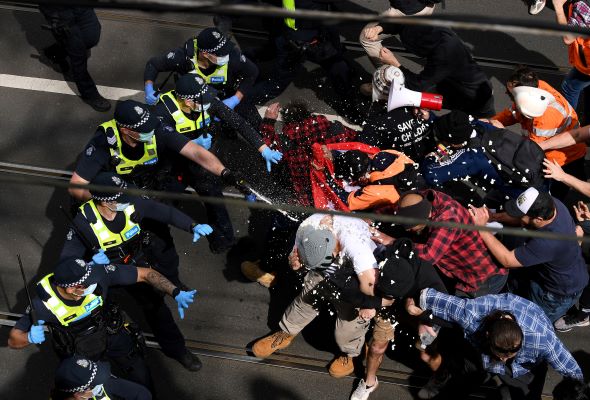 Spirit of Eureka NSW invites you to join those who have already signed our Open Letter. Although it is addressed to the NSW and Federal Governments, we know politicians from the major parliamentary parties overwhelmingly dance to the tune of giant corporations. The Business Council of Australia conducts the orchestra.  But there are divisions. The NSW Premier is under attack from all directions, most obviously from within her own Coalition. It reflects differences between corporate groups. On one side are corporations like BHP pretending that imperialism has a human face. On the other are Murdoch and US war corporations making hundreds of billions from nuclear submarines and other weapons. There is always money for war!

Yet under Covid-19 restrictions more people than ever struggle to put food on the table.

Spirit of Eureka isn’t about infighting or more divide and conquer between peoples of different states. Those dividing borders were drawn on maps to separate the original British colonies.

We just saw a disaster unfolding here and decided to act. We saw community, be it workers organising, neighbours helping each other, Addison Road Community Centre in Marrickville delivering more food to those that need it than any other organisation in Sydney, including those with all the corporate sponsors. We know it’s the way forward, a community of the people against the division of corporations.

People need answers. Even with government payments, more and more people live from day to day, choosing between food, medicines or paying rent, while others face Covid-unsafe workplaces. Renters face evictions. Mortgages crush home owners or deepen debts. People living alone or in crowded apartments suffer severe stress. Young people are isolated. Small, medium and quite big businesses crumble and many won’t reopen. Problems flow on to country and regional NSW and interstate. Crops, vegetables and fruit go unpicked. Why? Haven’t supermarkets made enough to pay family farmers more, so they can attract workers with liveable wages and conditions?

It took a month for governments to offer financial support, but many casuals can’t access it and others meet delays. Meanwhile giant corporations make record profits and still receive public handouts while sacking workers, and multinational developers refuse contract extensions to builders affected by lockdowns. What are the reasons?

Concerns of experienced medical, nursing and other staff working with Covid patients aren’t listened to. Why are so many frontline nurses reporting pressure to break NSWHEALTH guidelines? After 12 months, why aren’t all workers fit tested with masks to ensure their own safety and minimise outbreaks? Why are ambulance drivers and public and private testing workers not given proper protective clothing? And why are even more ambulances lined up outside hospitals with patients inside, because private hospitals have been mobilised to assist too slowly?

Taxi drivers and others transporting quarantining passengers are barely surviving financially. Why aren’t they employed full time, paid well and given safe protective clothing? What about aged care and disability workers? Or Covid hotel security guards? Why aren’t they all vaccinated and only working in one place? And why is only one purpose-built quarantine facility operating? Why can the rich come and go to our country, but citizens can’t return for last goodbyes?

Why didn’t the Federal Government tell the truth on vaccine rollout, but blame us for “hesitancy”? The once state-owned Commonwealth Serum Laboratory is the world’s second largest vaccine company. But it did no research on Covid. Australia is 89% dependent on imported medicines. Why?

The state government knew how contagious Delta was, but it “listened to business” instead of locking down fast and hard. Wasn’t it common sense to shut Harvey Norman and every other giant chain during “lockdown”? Contagion exploded. Why did it take weeks before a proper lockdown, but they immediately blamed people for not following “rules”?

Almost overnight targeted suburbs were overrun by police, interrogating people, searching shopping bags for “non-essential items”. Helicopters and drones with powerful cameras patrolled non-stop. Why did this only happen in poorer multicultural areas? It’s divide and rule. If locked-in people didn’t answer phones, why weren’t they door-knocked weeks before, to find out if they were okay or needed anything? Why send soldiers, even with food boxes?

Why has messaging to diverse communities been so negligible and confusing? After lockdown, four people died of Covid at home by July 31. Was the only message their families understood “Stay home or be arrested” after police arrived at their doors? Why weren’t community leaders engaged by governments before police? Why the shameful neglect of vaccine rollout to First Peoples’?

During the bushfires trapped people were rescued by the navy. Police were brave, alerting those in danger and helping with rescues. But civilian RFS and SES led the whole bushfire and flood operations. Why not look to them first?

Don’t these failures open some people to manipulation demanding fake freedom, and to dangerous protests that give no answers about the crisis’s cause or a way forward?

And are politicians using protests to divert blame from their own failures? Instead of organising people through a community focus, what motivates Mr Morrison to call for “freedom”, while calling in the army?

Why are pharmacies running out of vaccines because their fast, centralised distribution system is ignored and a top down, unsafe military one imposed?

And what made the NSW Government think sending thousands of HSC students plus teachers back to school was okay? Why did it take the Teachers Federation, which was never consulted, to lead teachers, principals, parents and community to stop this madness? Even students were refusing. They all know the reality of schools.

Isn’t this the way forward, to engage the real experts?

Governments have turned a health crisis into a law and order one. They are deaf to experts and frontline workers. They shift blame from their failure to support people onto the people they failed. Militarised responses condition people to accept police and military action. This “emergency response” legislation is unlikely to be repealed. Just look at the “Emergency” Northern Territory Intervention still crushing First Peoples 14 years on. Look at refugees locked in gaols. We have strong communities that need to be engaged and organised. Collectively our people and communities have the answers. Put them in charge, not politicians or police!