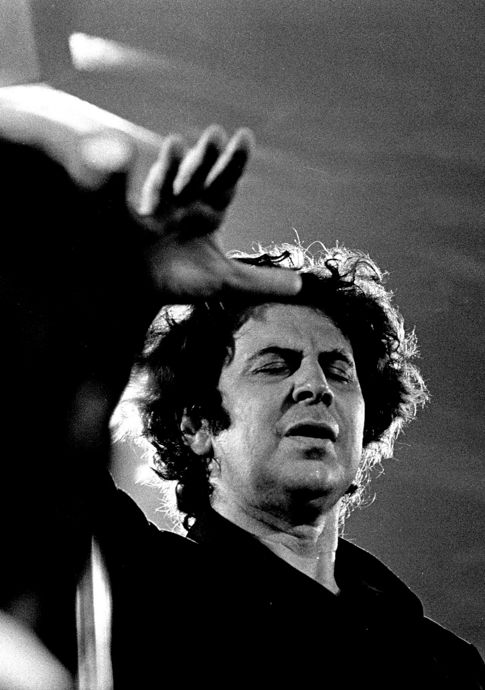 Who can resist the stirring sound of the bouzouki played on a deserted Cretan beach as two men dance the sirtaki in a state of Dionysian ecstasy? Or the powerful voice of Greek singer Maria Farandouri singing about Mauthausen concentration camp to music of profound melancholy. Or indeed, the pounding insistence of the musical scores of films like Z and Serpico? Those who have been moved by these sights and sounds owe their experience to the great Greek musician Mikis Theodorakis who has died aged 96. Vale Comrade Theodorakis.
Theodorakis’ life was one of relentless struggle. The following tribute appeared in Marianne, a magazine affiliated with the French Communist Party, on 3 September 2021. It was written by Greek Correspondent Fabien Perrier under the title ‘Figure de l’histoire grecque du XXe siècle, le musicien Mikis Theodorakis est mort à 96 ans’. It has been edited and translated from the French by me. Note that I have changed the tenses in the article to make them more compatible with English phraseology.

From the Marianne article – An emblem of resistance in modern Greece, Mikis Theodorakis died [on] Thursday, 2 September, at the age of 96. […] He was a composer of international fame and unfailing commitment, and a symbol of the Greek struggle in defense of freedom against Nazi barbarism, the regime of the Colonels and, more recently, of the international financial troika during the global financial crisis.

It is ‘a dark day for Greek culture, Greek music, Greek politics’, wrote the left-wing daily newspaper, EfSyn [Efimerida ton Syntakton, or Newspaper of the Editors], for whom ‘Mikis Theodorakis has become immortal after a romantic life on all levels’. And for good reason: his figure soars over Greece. At all times, by every means, Mikis Theodorakis has been the Greek bard at the forefront of militant engagement.
His first acts of resistance date back to World War II. Born on 29 July 1925 on the island of Chios of a Cretan father and a Greek mother expelled from present-day Turkey, Michalis ‘Mikis’ Theodorakis was only 14 years old when he wrote ‘The Song of Captain Zacharias’ inspired by a text of the Greek poet Nanos Valaoritis (1919-2021). The song would become the anthem of Greek resistance after the Nazis invaded the country in 1940. Theodorakis was also one of the first Greek resistance fighters. He was thrown into prison where his fellow prisoners introduced him to Marxist ideas. He then joined the Communist Party. He would never renounce this commitment, even if he never hesitated to express his differences with ‘the party’.

During the Greek civil war, between 1946 and 1949, his struggle against the seizure of power by counter-revolutionaries earned him torture and imprisonment. He was even left for dead after being beaten up in a protest. He survived, and immediately returned to his political activism. In 1947, the Greek Communist Party was banned and Theodorakis was deported to the penal island of Ikaria. It was there that he discovered rebetiko, the ‘Greek blues’, and began to mix these traditional tunes into his compositions. Not surprisingly, this mixture of tradition and underground music sat uneasily with those in power, especially when Theodorakis made the music itself an act of resistance. He taught it to his prison comrades, even organizing a choir and composing a symphony performed in front of the other detainees. He also composed ‘Epitaphios’ based on a text by the communist poet Yannis Ritsos (1909-1990).

The Creator of the Sirtaki

His music eventually gave Theodorakis international fame, particularly after he wrote the soundtrack for the film Zorba the Greek (1964) for which he invented the sirtaki, or ‘Zorba’s Dance’. Yet he always placed himself alongside progressive movements which on several occasions earned him imprisonment, deportation and exile.

In 1967, a military junta – the regime of ‘the Colonels’ – seized government by a coup d’état and established a dictatorship. Theodorakis was one of the first to enter into active resistance, but his music was banned and he was deported to the Oropos concentration camp. His international notoriety and a campaign of solidarity driven by Dmitri Shostakovich, Leonard Bernstein, Arthur Miller and many political figures such as the French politician Jean-Jacques Servan-Schreiber, forced the Colonels to release him from prison and grant him exile. He went to France and from Paris he continued fighting the junta by creating the National Council of Resistance (EAS). In the same period, he met the Chilean communist poet Pablo Neruda (1904-1973) and set his ‘Canto General’ (1971) to music. He produced the musical version of Neruda’s poetry in 18 countries over three years.

When the dictatorship fell in 1974, he was greeted as a hero in his country. He would never stop his political commitment nor using music as a weapon. An example of this were performances of a composition about the Nazi concentration camp of ‘Mauthausen’ that was inspired by the Greek playwright Iakovos Kambanellis (1921-2011) who was a camp survivor. His public addresses and his other compositions made him a champion of ‘Greek civilisation’ in music and politics.

‘You Have Tanks, I Have My Songs’

Theodorakis’ political commitment never left him and he returned to the international stage by speaking against the economic policies pursued in his country from 2010, when Greece was subjected to austerity measures imposed by the troika of the European Commission, the European Central Bank and the International Monetary Fund. In February 2012, he participated in a demonstration in front of the Greek Parliament and was injured by tear gas. He was then 87 years old. The image made the rounds of the media in Greece and Europe. The austerity policies continued, but the sight of a gassed Theodorakis had exposed the violence and repression that underpinned Greece’s public policies. In the face of dictators and oppression, Theodorakis would cry out: ‘You have tanks, I have my songs’. These songs reflect the history of Greek music as well as the story of his country.

As the former left-wing Greek minister Sia Anagnostopoulou said, Theodorakis’ musical compositions ‘served the reconstruction of the collective Greek memory, they built political consciousness and renewed the identity of a tortured people’. There is not a rally in Greece without the resonance of his compositions. This popular and demanding composer is no more, but his songs will be heard in the streets for a long time to come.” [End of Marianne article]

I end with a personal note and as a life-long admirer of Theodorakis and his music. He was an inspired musician and inspiring activist. The class struggle has not ended but his work and his life continue to give us courage to continue the fight. The sound of his bouzouki will be the sound of justice; his sirtaki will be the movement of solidarity. Vale comrade Theodorakis.