Warren was a speaker representing Spirit of Eureka – Victoria at the 4 July rally held in Melbourne, Queen Victoria Market. 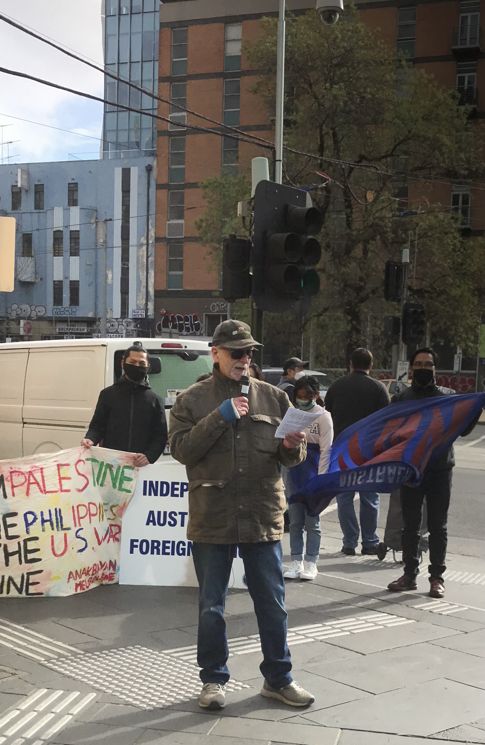 I would like to begin by acknowledging the Traditional Custodians of the land on which we meet today, and pay my respects to their Elders past and present. Always was, always will be Aboriginal Land.

Both Liberal and Labor are fixated on the idea that the US will defend Australia if we are attacked. They invoke the ANZUS Treaty as binding insurance, however, this agreement only provides for “consultation” in the event of an attack, rather than automatic military assistance. Indeed, the US has repeatedly stated that they reserve the right to take military action only when “… the interests of the USA… ” are threatened. (Ratted on the Kurds when Turkey attacked!)

Both Liberal and Labor hope to get around this inconvenient fact by ingratiating themselves to US governments by regurgitating almost every US foreign policy position and action.

Subsequently, Australian forces have followed US commands into Korea, Vietnam, Afghanistan, Iraq, and Syria, and are training pro-US repressive regimes in Indonesia and the despicable, repressive Duterte regime in the Philippines. None of these countries has ever threatened Australia. If defending “freedom and democracy” is the criteria, what about our neighbours in West Papua, Myanmar, and the Philippines?!

Nor were any of these invasions debated or decided by the elected politicians. The decision to commit Australian forces to war is made solely by the Prime Minister and “ticked off” by the Governor-General.

This subservient endorsement of US foreign policy has resulted in Australian governments surrendering political independence to the power-brokers in the US State Department, the Pentagon and the multinational weapons corporations.

Clearly, the US wants to retain its hegemonic position in the Indo-Pacific region and feels threatened by the rapid development of China’s industry, technology and science, as well as the global market capacity of the Belt and Road project.

The last thing the self-promoted “champion” of free enterprise wants is a real market competition to threaten the profits of its tax-avoiding corporate monopolies, the fossil fuel polluters and the powerful military-industrial complex.

Without the slightest embarrassment for its hypocrisy, it accuses China of cyber warfare, industrial espionage, using sanctions to bully and intimidate other countries, and disregarding international agreements and United Nations resolutions.

For its part, China has sought to build its economic and political influence in the Pacific through trade and investment, but has also encroached on the traditional fishing grounds of smaller countries with armadas of trawlers and large factory ships. China’s nationalist agenda no longer accepts US domination of the Pacific Ocean and is carving out its own “sphere of influence”.

The growth and modernisation of China’s military power in recent years has meant that the US can no longer be assured of winning any major conflict. It, therefore, seeks to confine China’s attention to the South China Sea and Taiwan Strait by its “freedom of navigation” sail-throughs and by pouring military hardware into Taiwan. This buys some time for the US to round up its “allies” and organise another “coalition of the willing” that might just give the US the edge in war.

As for “freedom of navigation”, the US, unlike China, has never ratified the UN Convention on the Law of the Sea. Nor has any commercial shipping been denied passage through the South China Sea.

If war breaks out in the Pacific, Australia will be automatically involved, without consultation of its government, let alone with the Australian people. Many Australian Navy and Air Force personnel, together with Australian warships and planes, are already serving directly under US Pacific Command.

If conflict escalates, both Darwin, (host to US Marines and the US Air Force) and Alice Springs, (host to the Pine Gap communications spy-base) could be targeted with horrible, unthinkable consequences.

Our subservient politicians are betraying the Australian people by underwriting US imperialist adventurism, exposing us to a potential war that nobody can win, that could bring death and misery to millions.

Australia needs to re-assert its sovereignty, scrap the so-called US Alliance, send the Marines home and dismantle Pine Gap, returning the land to its rightful indigenous owners.

Australia’s defence should be based firstly on fair and respectful relations with all countries in the Indo-Pacific region and backed by home-based armed forces sufficient to deter or repel any aggressor.