Adelaide – Rally for Peace and for Staying out of US Wars 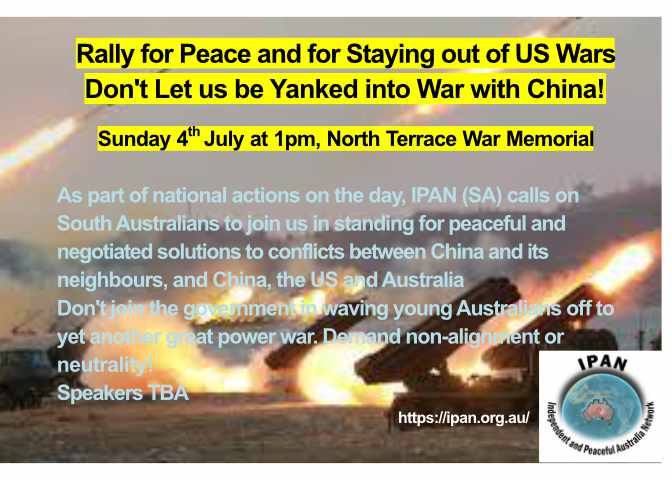 As the USA and its misguided allies foment tensions with China, the spectre of war looms closer. The pro-US right-wing forces in Australia are incessantly “beating the drums of war”.

We need to make it clear that the majority of Australians have no appetite for another senseless war. Especially a war which will most likely be like no other. The rally is being organized by the Independent and Peaceful Australia Network SA (IPAN SA).
Contact: Ph 0434162419/041265222 Email ipansouthaustralia@yahoo.com

Melbourne – Keep Australia out of US Wars With China

Join IPAN Victoria and many other organisations for a leaflet handout and public discussion on Australia’s role in U.S. led wars and the need for peace. Today, the U.S. is the biggest global military power with close to 1,000 military bases and hundreds of thousands of troops stationed around the world, including Australia.

We have followed the U.S. into war time and time again, with only bloodshed to show for it. Now is the time to talk about how Australia can become a truly independent and peaceful country. We hope to see you down at the Victoria Market in Melbourne near the main car park.
Contact – ipan.victoria@gmail.com, 0417456001

Sydney – No War With China

Email Nick at homishdu@yahoo.com.au to add your organisation’s support.