A People’s Inquiry has been opened by IPAN for submissions on the impact of the U.S. -Australia alliance, its costs and consequences and to canvas alternatives. Readers and contributors to Pearls and Irritations are invited to respond and join this urgent national conversation.

The Independent and Peaceful Australia Network (IPAN) has launched a national People’s Inquiry into the costs and consequences of Australia’s involvement in US-led wars and the US alliance and what are the alternatives.

Its aim is to promote a national conversation on this vital subject and is inviting submissions from a wide range of organisations and individuals, and that invitation is extended to the readers and contributors to Pearls and Irritations. The great majority of Australians have never been asked about this alliance, it’s implications and its limitations.

It can be argued that strategic dependence on the USA has led Australia into morally unjustifiable wars which have had disastrous consequences for the invaded countries including Vietnam, Afghanistan and Iraq. Furthermore, that dependence has led to Australian foreign policy mirroring that of the United States and is currently leading Australia into dangerous waters impacting negatively on trading relations with Australia’s major trading partner, China. The alliance with the USA and consequential ADF integration with the U.S. military would almost certainly draw Australia into any conflict which the United States has with China with subsequent economic disaster for the Australian people. 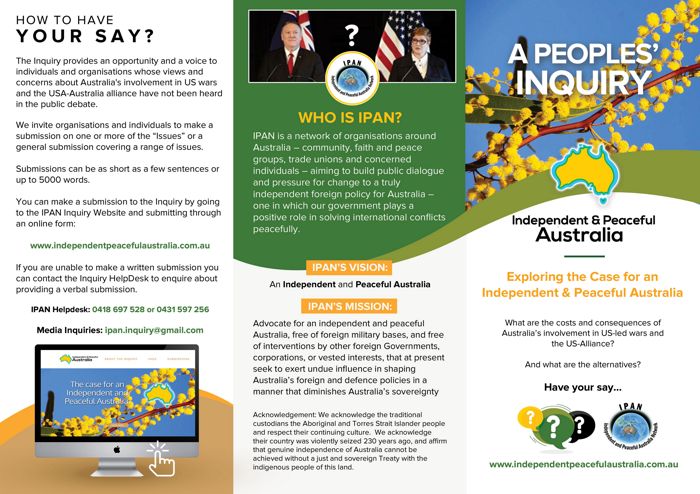 There have been negative impacts directly and indirectly on the Australian people, to our soldiers and civilians, compromising health and social needs, the environment and political and democratic rights as well as other impact areas listed below.

There are however many views on this subject and IPAN is keen to access those and in doing so provide a voice for the many whose views are rarely or never heard.

Submissions to the Inquiry will be considered by a panel of experts chaired by Ms Kellie Tranter, a lawyer and investigative Journalist. Whilst submissions may be of a general nature or range over a number of specific areas, IPAN has identified eight possible impact areas appropriate to this Inquiry and appointed panel leaders to each.

The Panel consists of: 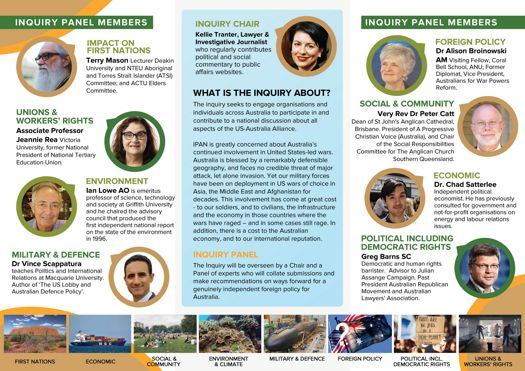 Submissions can be as short as a paragraph or up to 5,000 words.

Submissions can be made through the IPAN Inquiry website via the online form:

Each panel leader will produce a consolidation report relating to the submission received in their particular impact area and then the Chair, Kellie Tranter will compile the overall report which will be printed and publicised widely at public meetings, to the media and politicians.

* Bevan Ramsden is an ex-telecommunications engineer and a long-time peace activist and advocates for Australia’s independence. He is a member of the coordinating committee of the Independent and Peaceful Australia Network) IPAN).
Load More Related Articles
Load More In Latest News
Click To Comment