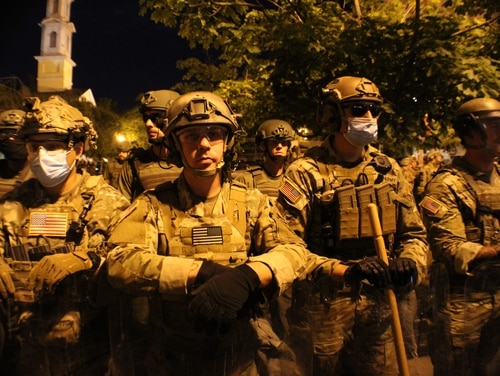 A bill is before federal parliament to enable the ADF, Reserves and foreign military forces and police to be used in Australian emergencies. It gives them immunity from civil or criminal prosecution for actions arising from these emergency duties.

“Emergencies” are undefined. Could they include industrial actions or large scale climate change protest actions?

There are very worrying implications in a Bill being considered in Federal Parliament.

It is called the “Defence Legislation Amendment (Enhancement of Defence Force response to Emergencies) Bill, 2020”.

Assistance is described as follows in clause (1) of 123AA:

(b)  the assistance is provided to prepare for a natural disaster or other emergency that is imminent, or to respond to one that is occurring or recover from one that occurred recently; and

(c)  the assistance is provided at the direction of the Minister under subsection (2).

Bush fire assistance is one emergency which might be justified but could certain so-called “disruptive” industrial actions or “disruptive” mass climate change protests be considered “emergencies”?

These are legitimate actions in our democracy but being confronted or suppressed by the Defence Forces or Reserves would not be a legitimate use of these Forces in a healthy democracy.

One wonders whether the government preparing for a militarised response to climate breakdown.

Further the legislation includes the use of foreign military forces and foreign police to assist in “emergencies”. Surely we Australians are, with appropriate resources and organisation, capable of addressing emergencies without the need for foreign troops or foreign police. And we certainly don’t want these foreign forces confronting and suppressing legitimate protest actions by Australian citizens.

In addition the legislation provide immunity from civil or criminal prosecution to the defence forces including foreign military, for their actions in these “emergencies”.

A protected person is defined under 123AA :

3) Each of the following is a protected person:

(a)  a member of the Defence Force;

(b)  an APS employee in the Department;

(c)  a person authorised under subsection (4) to perform duties in respect of the provision of assistance mentioned in subsection (1).

Foreign military forces and foreign police are included in subsection (1) are so are also provided with immunity from civil and criminal prosecution arising from their actions in performing duties in these “emergencies”.

Our political representatives in Federal Parliament should be urged to halt this legislation until it is closely examined by civil rights and constitutional law experts to ensure our civil and democratic rights are not under threat or our sovereignty compromised by this legislation.

(Bevan Ramsden is a long time peace activist and a NSW representative on the National Coordinating Committee of IPAN, the Independent and Peaceful Australia Network)