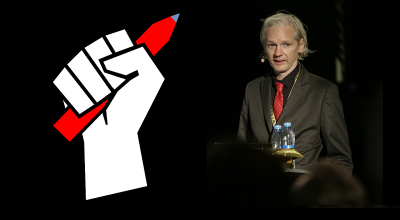 On September 7, Julian Assange will be facing another round of gruelling extradition proceedings, in the Old Bailey, part of a process that has become a form of gradual state-sanctioned torture.  The US Department of Justice hungers for their man.  The UK prison authorities are doing little to protect his health.  The end result, should it result in his death, will be justifiably described as state-sanctioned murder.  This picture was not improved upon by a prison visit from his partner, Stella Morris, accompanied by their two children.  Almost six months had passed since the last meeting.

Physical distancing was practised during the twenty minute meeting in Belmarsh Prison.  Morris and Assange wore face masks and visors, a state of affairs curious given the conspicuous lack of protective wear that has been given to Assange during the pandemic.  A prohibition on touching was observed.  “We had to keep social distancing and Julian was told he would have to self-isolate for two weeks if he touched the children.”  Were officials being careful and considerate?  Not according to Assange, who claimed it was the first time he had received a mask “because things are very different behind the doors.”  Morris noted a prevailing thinness, a yellow armband to indicate prisoner status, and the fact that he was “in a lot of pain.”

What awaits Assange next month promises to be resoundingly ugly.  He will have to ready himself for more pain, applied by Judge Vanessa Baraitser.  Throughout her steering of proceedings, Baraitser has remained chillingly indifferent to Assange’s needs, a model of considered cruelty.  Keen followers of justicia will be crestfallen: limiting access to legal counsel by keeping him caged behind a glass screen; ignoring his health considerations in refusing emergency bail during the COVID-19 pandemic.

Her behaviour has been in keeping with that of Chief Magistrate Lady Emma Arbuthnot, who has done her precious bit to soil the citadel of British justice in previous rulings on Assange.  With a family well and truly embedded in the British intelligence and military establishment, it was alarming to even see her name allocated to the Assange case.  In February 2018, she dismissed an application by the publisher to cancel his arrest warrant for refusing to surrender for his extradition to Sweden.  It did not matter that Swedish proceedings against the Australian had been discontinued, or that prosecution proceedings for breaching bail had not been commenced.

To this ruling came her cool judgment on February 13, 2018 on claims by Assange’s legal team that proceedings for failing to surrender to British authorities were disproportionate and not in the public interest.  The judgment is horrendous for a few reasons, and in keeping with the intentionally harsh, and unimaginative way British courts have dealt with his case.  Arbuthnot, for one, was unmoved by the findings of the UN Human Rights Council Working Group on Arbitrary Detention.  His “house arrest” and “harsh restrictions” had been proposed by Assange himself.  His time in the Ecuadorean Embassy in London could have been ended by leaving “the embassy whenever he wishes”.  He could use the computer facilities, eat what he wanted and see guests.

This caricature of freedom and choice was topped by her assessment that read grotesquely then, and even more appallingly now.  While accepting that Assange “had expressed fears of being returned to the United States from a very early stage in the Swedish extradition proceedings”, she found little merit to them.  Sweden would not have rendered him to the United States.  To have done so would have precipitated a diplomatic crisis between the UK, US and Sweden.  (And how, pray, would she know?)  As for whether Assange would face an extradition request to Britain, he could always “be able to argue extraneous considerations, fair trial and conditions of detention in the United States prison system.”

Which brings us to Baraitser, who has served as an appropriately bad replacement after Arbuthnot stood aside from the case, despite refusing to admit to any perception of bias.  Very little is known about Baraitser in the public domain, though the investigative outfit Declassified UK has been busy with some dedicated digging.  On February 28, 2020 it filed a Freedom of Information request with the Ministry of Justice (MOJ) seeking a list of all the cases which Baraitser had ruled upon since her appointment in 2011.  Of particular interest was her record on extradition rulings.  Two months elapsed before a reply from the information officer at the HM Courts and Tribunal Service confirming that it held “some information that you have requested”.  But the request was flatly turned down for not being consistent with the Constitutional Reform Act 2005.  “The judiciary is not a public body for the purposes of FOIA… and requests asking to disclose all the cases a named judge ruled on are therefore outside the scope of the FOIA.”  This limitation maintained “the independence of the judiciary which also means that the government does not provide guidance or policy on how judges should operate in court.”

The information officer’s reasoning was specious, not least because the FOIA request was premised on identifying what should, in any case, be on the public record: the cases upon which a judge has seen fit to rule upon, with outcomes.  This also ignored the fact that some cases involving Baraitser are actually accessible through the legal database Westlaw.

As a barrister wishing to remain anonymous explained to Declassified, “A court is a public authority for the purposes of the Human Rights Act and a judge is an officer of the court.”  A court also acted in public.  “There is no default anonymity of the names of cases, unless children are involved or other certain limited circumstances, nor the judges who rule on them.”

Undeterred, Declassified persevered and found 24 extradition cases over which Baraitser presided between November 2015 and May 2019 mining Factiva and Westlaw.  The results show an overly keen enthusiasm for extradition.  “Of these 24 cases, Baraitser ordered the extradition of 23 of the defendants, a 96% extradition record from publicly available evidence.”  One of Baraitser’s rulings was overturned on appeal, with the appellate court attaching “considerable weight to the likely impact of extradition upon the health and wellbeing of the defendant’s wife”, who would be “left with very little support.”  A scintilla of hope, perhaps, is in the offing.