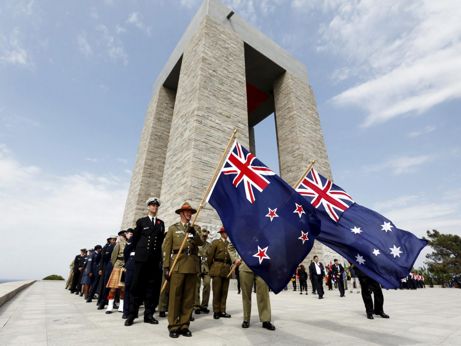 War commemorations nurse a dirty secret, though it is one displayed with a peacock flourish. The victors bring out the celebratory paraphernalia and talk about noble ideas; the defeated, quite simply, do not. We won, we celebrate and we, somehow, got things right. You, defeated, eat it, beat it. This does not quite work well with the ANZAC tradition, born, as it was in a defeat.

The Australians, along with their often forgotten New Zealanders, lost in their effort to invade and knock out Turkey in 1915 during the Great War. The Australian New Zealand Army Corps was part of a grand gamble hatched by the chief of the First Lord of the Admiralty Winston Churchill. “I can visualize great movements and combinations,” he reflected, even as the Western front had become a stymied slaughter house of barbed wire and attrition. This entailed defeating an ally of Imperial Germany, Ottoman Turkey, in an effort to seize Constantinople.

The Turks refused to play along in this gambit, and proved more than a match in defending their territory. In the ensuing bloodbath, 87,000 Turks lost their lives, as did 44,000 French and British Empire soldiers. From Australia, 8,500 perished; from New Zealand, almost 3,000. The defeat of the Allied forces in 1915 remains one of the graver distortions in the pop culture mash that is ANZAC. Failed invaders became sacralised heroes.

The ANZAC Day formalities on April 25 have become the stuff of secular religion in Australia. Children are inculcated into it; journeys are arranged to visit Gallipoli, with Turkish hospitality at the ready. Prime Minister Scott Morrison, who has used, rather oddly, the spirit of ANZAC in dealing with the current pandemic, cites the familiar line. “ANZAC Day is a sacred day for all Australians. It is an important time to remember the sacrifices of those who have gone before us, those who have laid down our lives or suffered great hardship to protect the Australian way of life.” New Zealand prime minister Jacinda Ardern also observed that the Gallipoli services had become “a pilgrimage of sorts for many New Zealanders.” The ritual on April 25 rarely deviates: the ANZAC Dawn Service, the Australian Lone Pine Service, an assortment of wreath laying ceremonies, the New Zealand Service at Chunuk Bair, Turkey.

But the effects of coronavirus have spooked the political classes sufficiently to cancel gatherings and make physical distancing a matter of priority. Parades have also been scratched. In a statement last week, Ardern noted that, “with global restrictions and isolation requirements in place in most countries it is simply not practical to hold this year’s event.”

Such measures have fallen poorly on aged ears. A centurion from New South Wales north coast, Henry ‘Corky’ Caldwell, has made a habit of marching for 75 years. When he got the news that ANZAC gatherings would be cancelled, he did not take matters too well. “It’s very important. I’ve been going to it ever since the war finished.”

Caldwell was fortunate to have a considerate daughter, taking it upon herself to post on Facebook about his disappointment. Thousands responded with notes of thanks for his service to country. One Phil Heesch of Grafton offered his jeep, with an idea that Caldwell would have his own private parade – observing physical distancing, of course – through the streets of Grafton.

Not having the usual parade day and gunfire breakfasts has produced a loose-ends spirit. “With parades and dawn services cancelled,” claims Channel 9 News, “many Australians are at a loss for how to pay their respects come April 25 this Saturday.” The conservative Returned & Services League (RSL), the druidical body of war commemoration, had a suggestion on what Australians might do. You might, according to the Victorian branch of the organisation, not be able to go to the Shrine of Remembrance, or a local Dawn Service, but you might #STANDTO. “As the Last Post is played during the ANZAC Day Dawn Service walk outside, stand in your yard, driveway, or on your balcony and observe a minute of silence in respect in respect of our veterans. Make sure you snap a quick picture and share it right there on our Facebook page using the hashtag #STANDTO.” Not even secular religions can resist the inexorable siren call of the hashtag.

Ahead of Saturday, there is much beating the drum for memory’s sake: Do not forget the significance of ANZAC Day, despite the anxiety caused by COVID-19. Remember sacrifices for a way of life preserved, whatever the current disruptions. But there is something to be said about forgetting the calls for war, the fictional necessity of having to invade or interfere in foreign conflicts for the sake of being relevant. The list of theatres of conflict Australia finds itself listed against should not be a source of pride. They read like a mercenary’s job list rather than a noble patriot’s calling, the woolly-headed commitments of commanders who should know better.

On the surface of it, such commemorations seem sweetly felt, and many a sentiment will be genuine enough. But as with the historically clipped versions of the Gallipoli landings available on RSL memoranda and the creation of the ANZAC “legend”, the nature of war as being necessary and a good thing will persist. As with each year, the incompetent classes, the political buffoons and gamblers who sent people to die in distant fields and towns the soldiers could hardly spell, let alone pronounce, will get a commemorative pass. Even on Zoom, Facebook or whatever zany mechanism war commemoration takes, facts will be resisted and mythology revered.