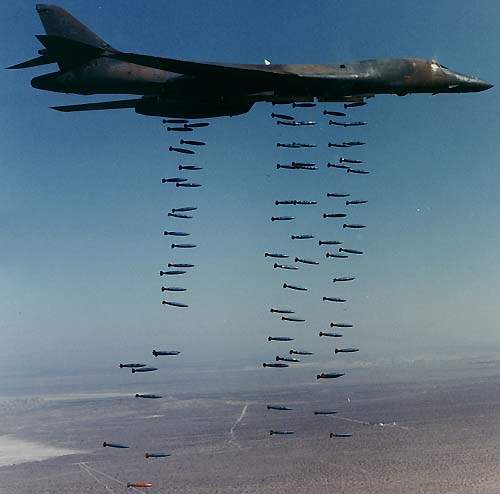 The just announced $1.1 billion expansion of Tindal Airforce Base near Katherine in the NT is a further recruitment of Australia into US imperialism’s front line against rival China.
(Some news reports have mentioned $1.6 billion – this because apparently $500 million has already been spent. It’s unclear whether the $1.1 billion is additional or in total).

The mainstream news-stories have highlighted the F-35 joint-strike fighter (which has been labelled the “flying heap of crap” for its unreliability and over-complexity) being based there as the main reason for the expansion.

US long-range bombers secure a base at Tindal

But this is misdirection, as the real news is the increased rotation or possible basing of long-range US bombers (B-52’s and B-1’s) at Tindal. The B-52 can, and the more modern B1 (see photo above) often do, carry nuclear weapons, and their range is such as to bring most of China under threat. Along with the increase in the marine contingent at Robertson Barracks near Darwin, the Northern Territory is becoming increasingly important in the US ring of containment of China.

Add to that that much of the new and future Navy buys by Australia ( frigates, air-warfare destroyers, submarines) are primarily aimed at supporting US task-forces on such missions as closing the Molucca and Timor Straits (between the Pacific and  Indian Oceans) to Chinese commercial and military ships in the event of heightened confrontation or war. After all, how can 3 air-warfare destroyers or 6 submarines (generally half of the fleet of 12 are resupplying or in repairs at any one time) defend a continent the size of Australia?  The answer is clear: they are not about defence, but about aiding US offensives like good little auxiliaries.

As usual, Australia will pay for these developments – directly in funding the expansion, and indirectly in the reaction from China. Of course, we shouldn’t be afraid of offending social-imperialist China when it is in the real interest of the Australian people to do so – but this is clearly not so with the Tindal expansion. Keeping Australia out of US military provocations and wars is a necessary task for anti-imperialists in this country.

Australia still hosts the North-West Cape US base in WA, which would send nuclear-weapon launch codes to US nuclear-armed submarines in our region in case of all-out war. The base is also a growing space warfare hub. And Pine Gap still remains a significant US control, communication and targeting centre, though with layers of redundancy built into the system (as it would almost certainly very early on be destroyed by a nuclear warhead in the event of nuclear war). It’s growing role as a ‘target acquisition’ centre for the murderous drone warfare conducted by the US in southern Asia, from Yemen to Pakistan in particular, implicates Australia in the undoubted war-crimes (including collateral ‘innocent’ casualties at 80% to 90% of all casualties) of such attacks.

China is an expanding, the US an over-reaching and declining, imperial power. The Chinese are cleverer and less arrogant than the US – whilst the “Belt and Road” program is primarily about Chinese capital export and influence, it does provide some secondary benefit to the countries involved, especially those already suffering from US sanctions. The US is more inclined to straight-out bribery or throwing their military weight around. Both major powers resort to the other’s primary strategy at times – though the difference is still noticeable.

But in the case of Australia, we are the most subservient and accommodating of dependencies – we demand little, pay for US expansion ourselves, and generally tug the forelock before we are even asked to. The next test of this pattern, in line with US speculation, is the possible siting of US intermediate-range nuclear-capable missiles in the NT, again within range of at least Southern China.  Last year the US withdrew from the Treaty banning these missiles which they had signed with Russia – a key reason was that China was never part of the initial treaty (1987), because it was unable or unwilling to build and deploy them at that time. But this has changed.

These are the updated versions of the missiles which led to the upsurge of the peace and nuclear disarmament movement in the developed world in the 1980’s, and led to that same 1987 Treaty.

At that time, European nations in particular objected to being a super-power nuclear battleground. Will Australia do the same, if this deployment becomes a reality?

This article was first published in Vanguard on 27 February 2020