There is some divergence of opinions amongst progressives of why there is an environmental crisis in Australia. The author of this article, David Studdert, argues the case of poor land practices by European settlers. We share it for consideration.
The article was originally published online at The Greanville Post. 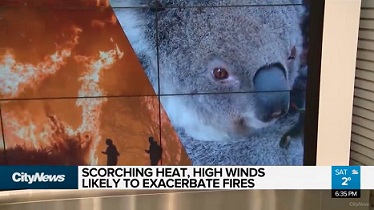 Be under no illusion. After these fires nothing will ever be the same for Captain Cook Australia. It is a war of the land against the people.

These fires will change Australia forever. The question is how and who controls that change?

Of course Morrison will go and soon, the government will reluctantly purchase more, but not enough, tankers and choppers, the landscape will scar for two or three years, but the scars inflicted by these fires, they will define Australia’s idea of itself for decades to come. These fires have burned more than lives and acreage. Australia has some tough decisions and a new world to get used to.

There is no more LUCKY COUNTRY for a start. That myth is dead and buried.

Donald Horne invented the term ‘Lucky country’ to describe Australia over sixty years ago.
It is still the glue that binds us together. The myth preaches that Australia is the best place in the world to bring up kids; that Australia is peaceful and quiet, homogeneous and removed from all the world’s wider problems. The lucky country is a land of opportunity, escape and open spaces; a fertile land loaded with minerals and wealth (mostly in faraway places we never go). Finally the myth gives a categorical assurance that this luck, this propensity, will last forever: for your kids and your kid’s kids.

And for a long time this myth did describe Australia and one way or another spoke for us. It set Australians free from the belief that the country was a prison, an outpost, isolated and stranded. It suggested independence, civilization, an inclusive future, ripe with possibility. And why wouldn’t it: after all, Australia is a comfortable place for white people to live. Suburban Australia is almost a white Australian dreamtime with no time, no history and ‘no probs’.

Over Christmas the fires destroyed this myth, destroyed it clean and sharp, in front of all of us.
We saw the burning forty acre lots, the ‘bush retreat’; the exploding beach houses; the destruction of suburban dreams all over the south east of Australia. We saw beaches covered in ash, the morning sky black as midnight and people fleeing into the ocean. The beach, the beach house, the bush retreat, laughing kids and forty acres, these are the symbols of the Lucky Country and they’re all burning.

Nor is it adequate to simply repeat the magic phrase ‘climate change’ whenever the topic is mentioned.

The size of these fires is, and their characteristics are, unprecedented. The damage goes far beyond any other large world fire of the last ten years. These fires have burnt six times the acreage destroyed in California and in the widely published Amazon fires. Six times!! NSW alone exceeds these two examples, then there’s the rest of Australia. The sheer size of these fires guarantees a local context. These fires cannot be explained without a grasp of Australian conditions and Australian land-use.

“They keep asking how a piece of coal can cause all this” records a pro climate advocate on Facebook, describing his encounters with survivors…

And no wonder. The notion that a disaster of this magnitude is simply and directly caused only by coal mining is ridiculous.

Of course climate change (undefined) has magnified and hastened this fire catastrophe. But it is not the only cause. It’s not even the major cause.

The major cause is the land use practices imposed by Europeans on the land of Australia since 1788. This is a war of the land against its mode of settlement.

Against the European modes of living and land-use practiced since 1788. This is a war against the entire way of life imported by European invaders into Australia. This is the land saying enough of this shit. That stuff doesn’t work here.

230 years of European land-management and lifestyle has caused this disaster.

Whether we as Australians have the courage to absorb and think our way through this truth is the big question.

In any case, the land is saying enough is enough.

These catastrophic fires, the collapse of Australia’s inland waterways, the disappearance of major rivers, the increasing droughts, the destruction of top soil through prolonged soil erosion – How clearly do we want the land to say it?

As far as Captain Cook Australia is concerned, fire, drought water shortages and dust storms mark the four riders of the apocalypse. Our Australia will not survive unless we engage with it and listen to it.

Worst of all these fires are just the start. It is almost certain they’ll increase in size and number. That is exactly the trajectory of the last thirty years.

Something on this scale is not simply the fault of coal or the failure to meet green vehicle standards.

This is a problem particular to Australia. It’s up to all Australians to solve it together.

Australians are answering the two key questions – who and why, in the following way
Who (is responsible) = Scott Morrison, the government or the greenies
Why is it happening: climate change or Australia’s natural condition.

Too many people are involving themselves in the simple and childish binary oppositions, presented by the media as for or against positions.

It doesn’t matter what side we’re on in this binary game. None of these explanations even begin to touch the real cause: the terms of white Australian settlement and land use since 1788.

Indeed these explanations obscure this truth. 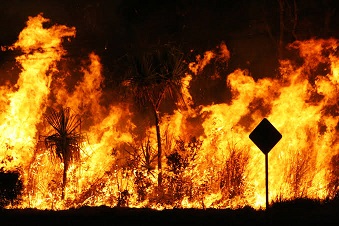 And they obscure it because while of course the climate is changing, none the less the problems are long-standing, pre-dating any modern form of climate change. The Australian inland river system has been under pressure ever since the 1960’s when cotton was first introduced. In fact if one examines old photos of paddle steamers and fish the size of children hurled from the Murray 150 years ago, it’s clear that the damage has been on-going since the first European settlement. The frequency and number of droughts have undoubtedly increased. Dust storms are mentioned in Henry Lawson and then there’s the fires. The trend towards the land’s rejection of the European methods, lifestyle and practices has been evident almost since white settlement began. Climate change has only quickened it.

The fact that these fires might only be the start of season after season of ever increasing destruction, should have a unique and defining impact upon how we think about ourselves as Australians.

For the damage inflicted by European practices is accelerating, not declining.

For Australian society to survive, for Australians to still inhabit a country we can recognise in forty years’ time, something drastic is required.

The war of the land against the system has been on-going for a long time. Australia needs to notice.

We need to recognize the primary truth that we are here as a group of people and we hope to continue living here. We adjust to the country; the country doesn’t adjust to us. Everything we do begins from this. The only ways to grasp the particularities of Australia as our place is to listen to the land.

To place what is right for us as a people over every other political consideration, over military pressure or colonial ties. In short we need to develop true independence of thought.

We don’t buy armaments from the US to pay off foreign backers. We don’t blindly sign treaties which penalise us and destroy elements of our society useful to us as a people. We don’t get into wars simply as mercenaries for some foreign government. We solve the problem of fire by developing processes that answer the unique requirements of our country and our place.

This is a simple principle, but since 1788 Europeans have practiced the exact opposite. We have introduced hard hooved animals into Australia, the continent with the worlds thinnest topsoil; released pests sometimes simply for gaming purposes; we have diverted rivers and streams, we have created mini Englands, green and lush. We have de-forested vast swathes of country much of which is no longer stocked or cropped. We have sucked water from the Artesian Basin without plan or thought. We have introduced crops utterly unsuitable for the country and wondered why rivers run dry trying to support them.

All of which is entirely in keeping with the motto of Sydney University: ‘the same mind under different skies’.

We have to know our country, before we can save it or save ourselves.

This new subjectivity can only come from traditions other than European.

In a 1982 interview I said that Australians can’t continue to live in Australia unless we adapt and learn from the indigenous culture; we need to learn from them, how this land IS.

Of course literalists and the Murdoch press will parody this as wanting to live in a gunya, wander from place to place, eat witchetty grubs and throw boomerangs. This type of nonsense is their stock in trade. Any idiot who thinks we should willfully deny ourselves the help of the great technology we now possess is truly a fool.

What Australians must do is listen to the land. What we must adopt from indigenous culture is that culture‘s sense of place. And adapt technology of whatever sort from whatever source, to answer the call of the country itself. This simple action is where the new Australian subjectivity must appear, to be truly Australian, to save the land of Australia and finally to save ourselves as Australians requires nothing else.

The biggest obstacle to achieving this is the import/export culture that dominates Australian life: the culture of the Rum Corp.

It is a culture of fees, commissions, mark-ups and government work. All generated by the movement of goods and services in and out of Australia. This is their income and has been since the first Rum Corp officer purchased rum from passing ships and sold it to the convicts. Sheep and now minerals, they are staples of the Rum Corp stretching back to 1828. As is utilizing government positions for personal gain. A model inaugurated by James MacArthur who grew his fortune magnificently through graft and corruption.

To these people Australia is simply a faraway place to get rich in before retiring somewhere home. What the land wants or needs is irrelevant. Rum Corp thinking also positions other things as irrelevant. The Rum Corp don’t fund the arts; or fund free state school systems or develop factories and industries where Australians could actually be employed. Not if they can avoid it. After all, they’d have to pay for it, and it generates no additional fees or commissions to them.

In fact contemporary Rum Corp Australia, (Scomo, latest mouthpiece), doesn’t require even 22 million people in Australia. Which is why they have nothing to say about the fires except, ‘that’s Australia for ya!’

Which is why they don’t care about people burnt out in the bush. Why they will never help them in any meaningful way and why they’ll use legislation and rising insurance costs to block any future development outside the cities.

Yet their thinking dominates Australia’s economic, social and political life.

Now it all needs to go.

If anything positive, is to emerge from this terrible disaster, my deep hope is it will lead Australians to think differently about our land. To leave the Rum Corp behind, and listen to the land.