for the Worker Student Alliance 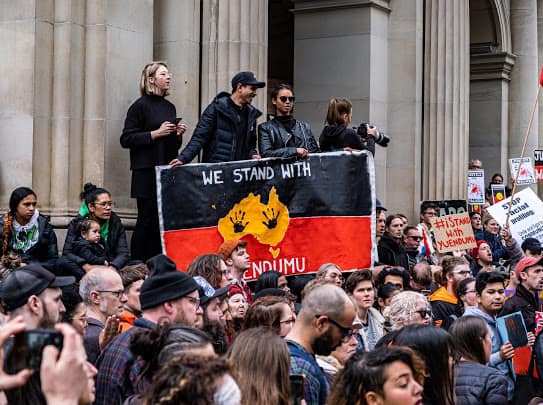 Rest in power Kumanjayi Walker. Rest in power to all our indigenous brothers and sisters that have been murdered in the ongoing colonisation of so-called Australia.

Last week WSA attended a rally in his memory. Walker was murdered in his home while his family were burying his uncle. He was murdered by a NT police officer who has since been charged with murder and is out on bail. Since then, the bourgeoisie media and corrupt police associations have been defending the character of a murderer thereby protecting the interest of the ruling class.

Indigenous communities have been continuously brutalised by white Australia. We don’t want talk of reconciliation we want justice. We want to not have our children taken from community, we want to not be disproportionately jailed, we want to not be killed in custody, we demand justice.

Systematic racism was pointed out in the findings of the royal commission into Aboriginal Deaths in Custody and has been ignored ever since. If all recommendations had been implemented we would have so many of our brothers and sisters lost to this racism with us today.

It’s hard loving a country that doesn’t love you.

We need all our allies to stand in solidarity with us and demand action, not just in moments of reaction but always until the fight is won.