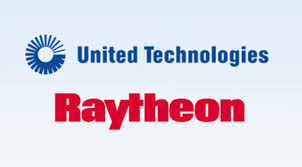 Raytheon with its current merger with United Technologies becomes the 2nd biggest arms manufacturer globally – and is the biggest in Australia. Their influence – like that of other military-industrials – is increased by the “revolving door” of generals and government bureaucrats into and out of their doors.

New US Secretary of Defence Mark Esper was recently and for 7 years a chief lobbyist for Raytheon. In 2018 alone, 645 senior government officials went to work at arms dealers.

This isn’t new to Trump’s US – it goes back decades and happens in Australia too (think Chris Pyne). When your only customers are governments, influence-peddling is critical. This is why excuses for the Yemen war slaughter like Raytheon’s “we’re only following government policy” don’t wash – they shape policy all the time. And always in favor of preparing for and of going to war – it’s good business.

Issues of costs and influence aside, Raytheon arms kill – that is their primary purpose. And the genocidal war in Yemen provides very graphic examples. In March 201 5 a market in Mastaba was bombed by the US-Saudi coalition – Raytheon-made bombs slaughtered 97 civilians including 25 children. And in October 201 5 the same aggressors attacked a funeral in Saana killing 1 00 people and wounding 500 children. The weapon was a  Paveway II  500-pound laser-guided bomb. It had been manufactured earlier the same month by Raytheon. From factory to killing-fields in weeks. 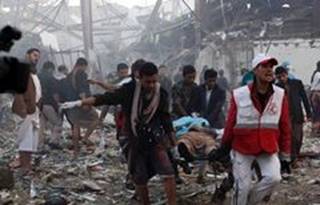 There are so many other grisly examples, from Yemen, Afghanistan, Pakistan, Iraq and elsewhere. And as civilians die from so-called precision bombing, Raytheon stock soars. Death is good business, mass death even better.

Raytheon Australia even as early as 201 2 recorded a turnover of $735 million – big business. I t was the sole bidder for an A $2 billion missile “defence” contract to protect Australian soldiers fighting overseas (defence?). Raytheon has been in joint- charge of the A$542 million Collins-class sub upgrade. Raytheon Australia, as part of the US government Sea Sparrow missile consortium, will do work in Australia for Saudi Arabia’s share of the contract. 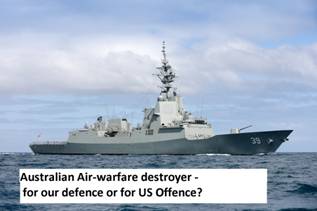 Raytheon was a “pioneer” in using Australian schools for their own purposes – making donations (such as computers ) in return for access to top science and maths students for recruitment (especially in South Australia). This is also increasingly happening in Australia’s universities, as well as military research. But protest about Raytheon (such as California Polytech students in the US did last year) and university authorities try to intimidate you.

Lockheed Martin is the biggest arms maker on earth, In the second quarter of 201 9, it had net earnings of $1 4. 4 billion and a record backlog (upcoming contracts) of $1 37 billion. According to their press release this  “… increases the 2019 outlook for all financial metrics”. Onward and upward in the slaughter business. Lockheed Martin is also involved in the surveillance and spying business for a whole alphabet-soup of US agencies from the CIA to the Pentagon.

But the centerpiece of its work is the biggest rort in military-industrial history, the overpriced, behind-schedule, underperforming F-35. In 2001  the global market was an estimated 5000+ aircraft, but cost over-runs and a major list of performance problems mostly related to its key “stealth” function have reduced that to some 2,500. This has blown out unit-costs leading to at least $200 billion total and rising. Like Raytheon, Lockheed Martin kills on a mass scale. In August 201 8 a Saudi bomb sold to them by Lockheed targeted a school bus – 40 children aged from 6 to 11  on a school trip were slaughtered, along with 11 adults. The markings on the tail-fins were traced by journalists to a shipment of a thousand such laser-guided bombs sold to the Saudis.

A spokesperson from Lockheed Martin referred questions about the bombing to the Pentagon – washing their hands of the blood staining them? Saudi Arabia is the biggest single customer for both the US and UK arms industries – on a scale of billions of dollars of lethal equipment, year after year. Lockheed Martin also designs nuclear weapons and makes cluster bombs (a weapon that kills far more civilians than military, in places like Cambodia, Vietnam and Lebanon).

A number of international partners have reduced or delayed their orders, but subservient Australia has continued its purchase of an eventual 1 00 F-35 warplanes – the cost keeps rising, but reaches $20 billion for 72 aircraft, with another 28 to come from the early 2020s.

The social, educational and health needs of the Australian people this huge outlay could meet are obvious  – the “need” for the warplane far less so. It’s again more about compatibility and interoperability with the US war machine than anything to do with Australia’s genuine defence needs. And indeed the US treats F-35 contracts as a matter of loyalty to them – not simply business. Turkey is being excluded from the development program because they bought a Russian missile system – perhaps to their benefit! Other Australian contracts include $700 million for the future sub’s weapons and $900 million for simulation (training) capabilities of the Australian Defence Force! 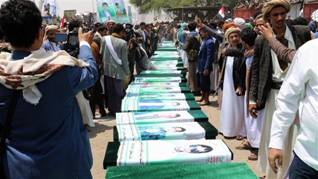