No Australian Support for U.S. Wars – Climate Action for Peace 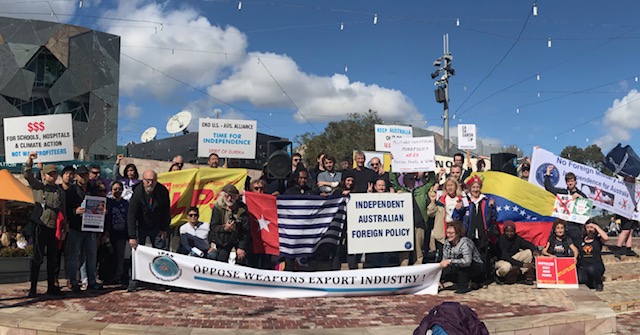 On 21 September, the International Day of Peace several peace, anti-war and community organisations came together in Melbourne at a colourful and spirited rally calling for global peace, an end to wars of aggression and ending Australia’s support for U.S. wars.

The rally, organised by Independent and Peaceful Australia Network-Victoria, called for the removal of US bases and troops, an end to US-Australia military alliance and for an independent and peaceful foreign policy.  Speakers called for an end to imperialist wars of aggression, more public funds to hospitals, schools and climate action, not to wars and fossil fuel profiteers and makers of climate change.  Solidarity with people and countries fighting for justice, peace and independence.

In a powerful speech an Indigenous Palawa Woman from Tasmania, pointed out that “there’s no way that we could ever truly achieve peaceful foreign policy without confronting our colonial past and acts of genocide that have happened and been ignored, and the acts happening now that are also being ignored.”

A member of Young Unionists for Climate Action Network made a compelling speech on the urgency for collective grass roots mobilisation by ordinary people demanding climate action, not to wait and rely on politicians who will never act.

Several speakers made links between climate crisis and wars, in particular on how fossil fuel corporations and military corporations profit from and promote the world’s continuing dependency on fossil fuel and being in a perpetual state of wars.  “Military-Industrial monopolies need fossil fuels and wars!” proclaimed one placard.

Coming a day after the massive climate crisis strike and march through Melbourne on 20 September by more than 150,000 young people and supporters, including unionists and working people who left their jobs to participate, both rallies sent powerful messages.

An IPAN speaker concluded the speech noting “Australian people’s contribution to ending global wars of aggression is to build a broad people’s movement that unites many strands of peace, anti-war and anti-imperialist campaigns and struggles to remove U.S. bases and troops, end US-Australia military Alliance, and promote an independent and peaceful foreign policy that respects the sovereignty of people and countries. Independence from all big powers.  This will be our meaningful contribution to global peace and justice.”

IPAN-Victoria thanks our supporters and friends

Thanks to all excellent speakers.