The second of a three part series of articles by Humphrey McQueen (Read part one here.)

A Peoples Court into the current financial system would begin from its de-regulation. In January 1979, then treasurer Howard appointed the Campbell Committee, headed by the boss of a real estate giant, Hookers. The other four Committee members came from the financial sector: one from the AMP, then still a mutual; one out of the bank and stock-broking business run by the shyster Sir Ian Potter; one from the Reserve Bank; and one from the government’s Resources Development Bank. That only one of the members was any kind of screen jockey is a sign of how different the political economy was before de-regulation.

Campbell’s enthusiasm for financial deregulation began in the early 1960s when the third Menzies credit squeeze left the Hooker Corporation in effect bankrupt. Unable to get backing from of any local bank, Campbell raised more than six million pounds in the U.S. in 1964-5, including from Lockheed Aircraft. Those connections encouraged Campbell to spread Hooker’s operations into Atlanta property developments, this time with backing from the Mellon Bank of Pennsylvania. Campbell directed Hookers into ‘landbanking’—buying up cheap land at low interests rates and sitting on it until residential demand delivered a profit. The scheme flopped. By 1977, Hookers was again in effect bankrupt. This time, the merchant bank CitiNational rode to the rescue. In appointing Campbell, Howard set a fox to guard the chickens.

The regulatory environment had been shedding its rigidities before Howard tabled the Campbell Report in November 1981.

To survive the challenges from overseas competitors, the trading banks were concentrating to the current Big Four. The Bank of Adelaide fell to the National in 1979 after losses in the Sydney property market.  On 1 October 1982, the Bank of New South Wales merged with the Commercial Bank to take on the western Pacific behind the banner of WESTPAC. These mergers spotlight how ‘de-regulation’ from state apparatuses is matched by greater if different regulatory clout through a concentration of capitals.

Were it not for legislative bans on mergers and foreign takeovers in the sector, Australians would be in the grip of only two huge banks, both owned overseas, as in New Zealand.

The reasons for failure begin from the following six grounds:

a. The fact that commercial law expresses the needs of capital raised to an obligatory norm. In the words of Adam Smith: ‘Laws and government may be considered in every case as a combination of the rich to oppress the poor, and preserve to themselves the inequality of the goods.’ In 1833, Britain’s Attorney-General advised the Cabinet that making manslaughter the appropriate charge against a master whose negligence had caused the death of a servant ‘would create a serious objection to the investment of capital.’ Consumer protection is subject to that framework. In 2005, NSW Chief Justice Speigelman ruled that ‘Unconscionability is a concept which requires a high level of moral obloquy. It if were to be applied as if it were equivalent to what was “fair” or “just”, it would transform commercial relationships.’

b. To make sure that the courts never make that mistake, judges are chosen for their expertise in commercial litigation. Whether deliberately biased or not, they will have absorbed as natural the working assumptions of the practices upon which they are called to pronounce judgement. Those prejudices are institutionalised: first by their training; secondly, by their experiences at the Bar; and finally through operating within inheritances from the Common Law and by precedents set in the interpretation of Statue Law. In reaching their decisions, judges are constrained by the fear that an exemplary penalty will be overturned on appeal for being out of line with business standards.

c. A legislative framework through which Freehills can drive a bullock team.

d. It takes years to gather evidence which has to be sent to a external law firm to be pulled apart and then reassembled before deciding whether it is worth the time, money and effort of going to trial. The authorities face the certainty that the accused has the resources to drag the case on for years, all the way to the High Court on appeal.

e. The decision to proceed to prosecution is also seen as a second-best option because it is hard to convince juries about intangibles. Unlike a murder trial, there is no corpse and no weapon. Instead, financial offences are constructed on intricate manoeuvring. It was no accident that Alan Bond went to clink over a physical object, a $59 million Van Gogh painting, not the billions with which he played fast and loose.

f. these circumstances contribute to why regulatory authorities settle out of court. On top of which, they were under-resourced long before the coalition slashed their budgets.

Financial de-regulation did not plop up out of a clear blue sky. It had been building since 1960 to service the restructuring of global capital. Some of what is now called ‘financialisation’ grew out of the needs of corporations engaged with physical goods and services. Financialisation cannot be severed from those sectors, any more than it can be equated with them. All corporations engage in tussles for larger slices of the profit that has to be realised out of the surplus-value from our labour of wage-slaves. How those conflicts among capitals work out is transformed with each stage of capital expansion, and will be different in each nation-market-state at the same moments. ‘The City’ is comparable to Wall Street but not its cypher. 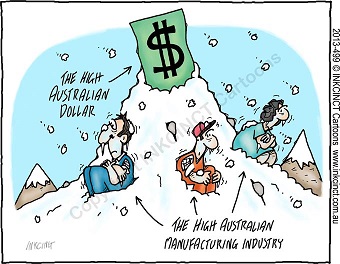 Similar specifics apply to the developments in the Australian economy, which rode on the sheep’s back until the mineral export boom from the mid-1960s alleviated the recurrent balance-of-payments crises while the consequent appreciation of the dollar ate into the competitiveness of rural and processing sectors. Early in 1974, two Australian dollars got you almost three U.S. ones. Australians needed less money to buy imports while exporters lost sales because their goods cost more in U.S. dollars.

Making matters worse, the Whitlam dingbats in July 1973 slashed import tariffs across the board by 25 percent, doubling the impact of the rising local currency. ‘Free trade’ ideologues blinded themselves to the connections between financial drifts and real production. In the 2000s, leader of the ‘Left’ Doug Cameron had not woken up to the fact that a higher dollar from the mining boom had more than erased effective tariff levels. Nor did the Aussie’s 30 percent slump preserve the car plants from closure. The big three auto-makers decided to devalorise because of global over-capacity. Those decisions were determined in the realm of physical goods, not by a flight of money-capital, still less because of a bad idea called Neo-Liberalism.

The most spectacular example of the multiple interlocks between financial doings and physical production came out of the 1973 price increase by the Organisation of Oil Producing Countries (OPEC). For more than a decade, the real returns to its members had fallen along with the depreciating U.S. currency. To redeem their rate of return, OPEC ministers tried to lift the barrel price for crude.

That spike speeded up GM and Ford’s retooling away from gas-guzzlers in favour of 4- and 6-cylinder cars, sectors already dominated by Japanese makers. To maximise the benefits from mass production, the auto giants sourced components from multiple locations. Canberra gave GM-H permission to import automatic transmissions from its plant in the Philippines in exchange for exporting 200,000 engines.

Global corporates needed a financial system to match the flows of its physical capital.

We have seen the leading role played by the property developer Hooker in financial de-regulation. Much more than the ambitions of one honcho tied the world of finance to that of bricks-and-mortar.

This reconfiguration of the market for commercial properties accompanied a change in their financing. Since the 1960s, there had been a drift away from the single owner, such as AMP, and towards securitisation with unit trusts, whether listed or not. Between 1980 and 1994, the funds in property trusts grew tenfold to $100bn.

According to the CEO at Building Owners and Managers Association, the message was clear: ‘listed property is neither property nor equities. It is in a class of its own.’ How ‘clear’ was the new status of listed property if it had to be defined by what it was not? Its elevation to ‘a class of its own’ looked like a confession that the managers had lost track of what they were marketing. At least, BOMA’s CEO realised that: ‘[i]f the eighties reinforced one home truth it’s that cash flow is sovereign.’

Looking back from 1993, the CEO of Macquarie Bank mused: ‘Perhaps the Australian commercial office market was the first causality of the world de-regulation of capital flows.’ Macquarie had been itself set up in 1985 to make the most of the new uncertainties.

A fuller account of the thirty-year roller-coaster ride see http://www.surplusvalue.org.au/McQueen/BLF/blf_1986_de-reg.htm

For some overview of what local and imperial bankers have been up to here during the past 200 years: