This article came from the Independent Australia

Republished with permission of the author 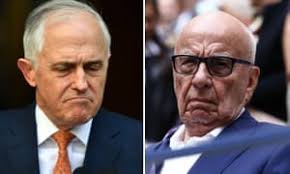 IN ONE SENSE, feeling sentimental about the deposing of Australia’s aggrieved Malcolm Turnbull by loiteringly dangerous and terrified reactionaries within his own party would be akin to feeling sympathy for a maimed animal readied for the coup de grace. He had already laid the grounds for weak, self-corroding leadership — spates of poor political judgment, fatuous attempts to seek reconciliation with ideological detractors when he was merely giving ground and, ultimately, an inability to keep his nerve in the face of the pugilists.

That is not to say that Turnbull’s own detractors from within his own party did not receive generous dollops of encouragement from the News Corp fraternity and those with a traditional fixation nourished by the world view of Rupert Murdoch.

While forensic analysis involving a combing through of causal and correlative factors is delightful, Murdoch is in the business of backing, moulding and overthrowing governments. Some do it by the power of the gun backed by foreign finance, others prefer a battalion of editors and self-entitled opinion makers to do what amounts to much the same thing. The blood quotient might be less, but the impact is still impressively devastating.

Australia’s own national broadcaster has been wading in these troubled waters of late, taking the view that the country’s media moguls, supported by a phalanx of populist brutes gathered at Sky News and Radio 2GB, played a decisive part in forcing the hand that signed the death warrant in the Liberal party room.

Political editor Andrew Probyn led the charge of questioning, suggesting that the fall of Australia’s 29th prime minister was marked by a “truly unique” reason:

‘His was the first known prime ministership to be the subject of a billionaires’ tug-of-war between the nation’s most powerful media moguls.’

Probyn claimed, in a “pieced” picture of events, how both Murdoch and Kerry Stokes, the chairman of Seven West Media, had chatted some time prior to 24 August in what had the whiff of “a campaign to oust” Turnbull by News Corp. Stokes himself had a “high personal regard” for Turnbull and was irked by the prospect that this project of destabilisation would only serve to hand the prime ministership on the plate to opposition leader Bill Shorten.

No matter. “Malcolm has got to go,” came Murdoch to Stokes — or so went Probyn’s account.

“We got to get rid of Malcolm. If that’s the price of getting rid of him then I can put up with three years of Labor.”

The inner world of the Machiavellian had been laid bare.

It transpires, on a fussily closer reading of the patchwork of events supposedly coming into the hands of the ABC, that Probyn was essentially on the Turnbull drip feed. It was the former Prime Minister who had been supplying the tidbits and Probyn, ever enthusiastic, leapt for the main course.

There was no direct sense that the conversation ever took place quite the way portrayed and Stokes did much to claim that he had done nothing of the sort. But teasing out ground between the denials can reward the pursuer and to suggest that there had been absolutely nothing in Murdoch’s fulminating against Turnbull, or his attitude seeping down to the minions at News Corp, would be to avoid the man’s sustainingly debauching influence on all matters democratic.

The entire picture painted by Probyn enabled the hyenas of News Corp to give shrill cries from the catacombs. There was the “Left” again, confecting their own brand of conspiracy with old Rupert, doyen of the journalistic mogul’s club, ever above such matters.

Where Probyn was not wrong was to have drawn the most obvious of conclusions: that Murdoch has been responsible for overthrowing, installing and backing governments for decades. When he has felt an urge, he has been an open spoiler and encourager, a true electoral meddler. The bellowing and vicious Sun proudly proclaimed in the British election of 1992 that, ‘It Was The Sun Wot Won It’.

The stratagem could go further. In 2011, for instance, he enthusiastically backed General David Petraeus as a possible Republican candidate against President Barack Obama. The messenger, in that case, was Roger Ailes, the chairman of Murdoch’s Fox network, who expressed the view that “the Republican field needed to be shaken up”. That backing would have come with all the Murdoch trimmings, toxicity and all.

The thesis of Murdoch interference is also advanced by virtue of how the man works relative to his companies. He is far from being a distant ruler in the heavens only occasionally pulling strings or suggesting policy. Ken Auletta, in endeavouring to sketch a profile on the mogul in 2007, saw a man regularly engaged with his editors via phone.

What, pressed Auletta of Murdoch, gave him most pleasure in running his vast paper and communications imperium? “Being involved with the editor of a paper in a day-to-day campaign… trying to influence people,” came the unreserved reply.

As Richard Cooke explained in The Monthly in July:

‘Few executives are as synonymous with their companies as Rupert Murdoch is with his. News Corp, he had said in the past, “for better or worse, is a reflection of my thinking, my character and my values”.’

A truly ghastly reflection that continues to operate with varying degrees of skill and plague-fuelled menace against the democratic sentiment.