This article was a leaflet distributed by Spirit of Eureka at the “March for Science” rallies in a number of capital cities, on 22nd April. 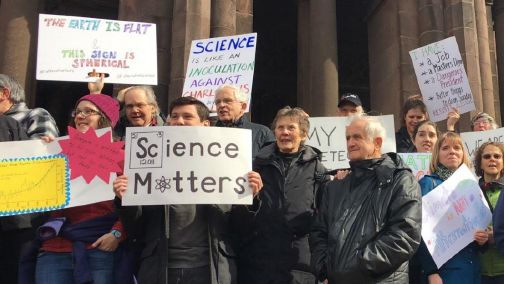 In recent years, the Western world has been treating science with contempt. Multinational companies & their associations have opposed climate science research findings for some time, while publicly giving lip-service support.

The multinational oil giant, ConocoPhillips said in 2011 that it “recognizes” human activity leads to climate change yet in 2009, argued against the Environmental Protection Agency’s determination that heat-trapping greenhouse gases were pollutants endangering public welfare.

The US Chamber of Commerce and the US National Association of Manufacturers have doggedly fought greater environmental regulation. Now the situation is even worse with a climate change denier as US President.

David Suzuki, the well-known Canadian scientist, after pointing out that Canadian Prime Minister Stephen Harper cancelled virtually all Canadian research on climate change, put it well: “…the politicians and corporate executives are driven by a totally different set of values, by the drive for profit, for growth, and for power”.

Malcolm Turnbull came into administrative office with the hopes of many, supposedly renewing the CSIRO focus on climate science—research which once was leading the world—and reversing some of the more than 1000 sackings of the Abbott era. Yet irreplaceable experts such as the CSIRO Fellow Dr John Church, expert in estimating & understanding sea-level rise, is one of the CSIRO scientists who lost their jobs. As the Climate Science Centre head said, “You can’t cut a third of a climate science group and not suffer some damage to reputation” and agreed that the losses would have a major negative impact on Australian research.

Whilst “crying poor” that it must get the deficit down and leaving hundreds of scientists jobless, the Turnbull administration is singing from the multinational hymn book, somehow finding the money to reduce taxes for smaller businesses as the first step towards implementing the Business Council of Australia’s goal of an across-the-board business tax reduction to 22%. The Business Council allows only the very largest corporations as members.

At the same time, the current administration peddles the anti-scientific “clean coal” theory. Burning coal for electricity emits toxic & carcinogenic substances into our air, water & land. The Australian Academy of Technological Science and Engineering estimated coal’s health impacts cost taxpayers $2.6 billion per year and the new plants still produce about 80% of the emissions of an equivalent old plant while renewables such as wind & solar emit zero emissions. Moreover, “clean coal” doesn’t help Australia meet its obligations to reduce its emissions 26-28% by 2030 below 2005 levels.