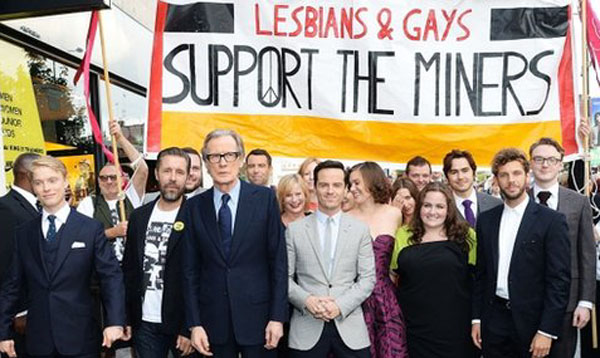 (2014, 120 minutes)
Set in 1980s England, the film brings alive the true story of gay and lesbian activists who raised funds to help families affected by the British miners’ strike. You can check out the trailer here.

I prepared this response in preparation for an event to be held by the A.C.T. Branch of the A.E.U.

Screening Pride as an A.E.U. event evokes the events that the film portrayed when a group of London gays and lesbians decide, not without internal dissent, to raise funds to assist miners in their struggle against Mrs. Thatcher’s shutting many of the nationalised pits in 1984. The Welsh village of Onllwyn on which they bestow their funds is not as ready as the Londoners had been led to believe. The arrival of the Sexual Revolution in a mini-bus is not the last tense interaction.

At this distance, and twenty-five years since Thatcher was forced to resign as British prime minister, the vehemence of the British response to her death surprised many Australians. ‘Ding-dong, the witch is dead,’ the street parties rang out.

A couple of instances will help to explain the bitterness. As Secretary for Education she earned the nick-name ‘Margaret Thatcher, Milk Snatcher’ for taking the free milk from schools. Her attacks on the London County Council for a programme not unlike our Safe Schools was part of the reasoning behind why the gays and lesbians adopted the policy of our enemy’s enemy is our friend.

The passions Thatcher could generate came home to me on a crossing from Cherbourg to Weymouth early in August 1983 when I fell in with an English family on a day trip to buy duty-free grog on the Channel islands for the daughters’ wedding. Mum did all the talking:

‘I voted for her the first time. Look at the mess the men have made, I said. Let’s give a woman a go, I said. Never again. Look at him’ – pointing to hubby – ‘He’ll never get another job.’ Silent concurrence. ‘Have you seen our new coins. Taken the place of our one-pound note, they have. We call ‘em Maggies. D’yer know why?’ She handed me one to feel: ‘It’s thick. It’s brassy. And it’s pretending to be a sovereign.’

Next year, I was working in post-fascist Barcelona when striking miners came through to gather funds. I joined in. I suppose I have Thatcher and Franco to thank for my start as a union and political activist.

No matter how often you have enjoyed Pride on your small screens, there is an extra pleasure in store on April 5 by being present in a theatre packed with friends and strangers all inwardly cheering on the goodies. That feeling is some of the ‘society’ that Thatcher feared, and with good reason. The people united defeated her Poll Tax, driving her from office. We can do the same over penalty rates.

As a piece of film-making, Pride rejoices in its introducing of stereotypes. That is not how they remain since they are transformed through their growing attachments with each other against a common enemy for a shared vision. In their hearts and in their heads, they know that Thatcher’s Britain is not the best society that we humans are capable of creating.

Such larger issues are illuminated by personal recoveries. Watch for a brief exchange in the clubhouse kitchen between the Bill Nighy character and his wife. Pride is far from a weepie, but you’ll need your tissues once the Welsh start to sing.

Pride also provides a geography lesson as Nighy explains the pride that his fellow miners take from working the seam of coal that begins in Spain, surfaces in Wales continues under the Atlantic to appear again in the coal-mining States of Pennsylvania and West Virginia. That geological line expresses the working-class solidarity across national barriers that I encountered in Barcelona.

Without giving the final minutes away, the arrival of the cavalry for the May Day parade in London is not an alternative fact. It happened. It shows how much trade unions and community groups can achieve through working together.

When I attended a matinee session of Pride at Palace Electric early in 2015, the audience was largely retirees – ‘Vintage Reds’ as retired unionists in Canberra call their organisation. The credits began to roll to a smattering of applause before bursting forth in response to a woman’s voice: ‘That’ll learn yer, Tony Abbott.’

It hasn’t. But as teachers, we know there is always likely to be one recalcitrant in every playground.

Between the screening of Pride and May Day, Canberrans will have three opportunities to express our spirit of pride in the decencies that the labour movement carries forward.