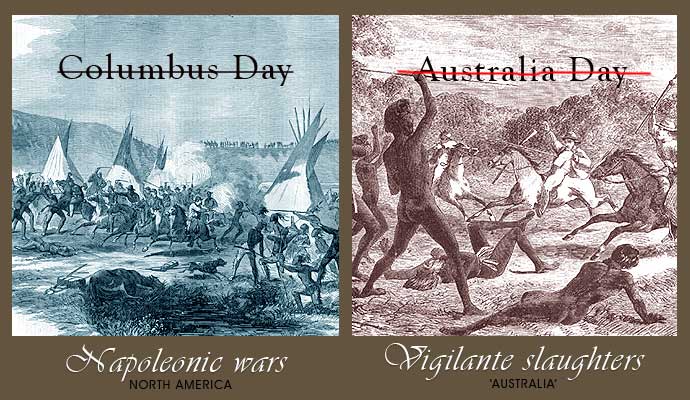 Native Americans were successful in convincing one of the world’s leading powers not to celebrate Columbus Day, the day that Native Americans argued began the changing of their whole world and the theft of their country.

The British used the now condemned Doctrine of Discovery in right of the British Crown to seize the land in the first instance. Then the Irish and some other convicts, who made up the American colonial penal colony, rose against the British by declaring that they were no longer going to be dictated to by King George III and thus began a revolution for independence. Because the British were fighting the American war of independence and Napoleonic wars at the same time, the planned date for Britain to invade Australia was set back.

Later the New South Wales Rum Corp had a similar opportunity for independence, just as Washington and Franklin had, when the Rum Corp rebelled against Governor Bligh, which resulted in Governor Bligh’s return to England, leaving the colony of New South Wales without a Governor for two years, prior to the arrival of Lachlan Macquarie. It was during this time that there were major land grabs, which were never overturned by Lachlan Macquarie or anyone there after, and so began the squatter movement.

It is interesting now to realise that the colony of New South Wales was, in fact, a land truly stolen.

One thing that hurts and disappoints First Nations Peoples is the fact that the High Court of Australia in Mabo (No. 2) failed its judicial obligations, when they could not identify any form of legal land tenure that affirmed any type of superior land title authority, yet the judges were prepared to openly commit a fraud by suggesting that the land titles from invasion onwards extinguished native title in the evolutionary process of land theft.

The full bench of the High Court in Mabo (No. 2) committed yet another fraud when it attempted to argue and rule that it is far too late in the day to correct the land tenure system:

It is far too late in the day to contemplate an allodial or other system of land ownership. Land in Australia which has been granted by the Crown is held on a tenure of some kind and the titles acquired under the accepted land law cannot be disturbed. [para 28 ]

This is contradicts the American Supreme Court rulings of the 1980s, which ruled that one hundred years prior the American government military forces through Colonel Custer and the Bureau of Indian affairs had committed offences against the Lakota/Oglaga Sioux in respect of the Treaty of Fort Laramie/Sioux Treaty (1868) and the Bureau of Indian Affairs failed to extend appropriated monies for the right reasons in respect of the Seminole tribe who were relocated from Manhattan Island and surrounds to a reservation in Northern Florida. The court awarded costs and compensation in favour of the Native Americans despite the offences occurring more than one hundred years before. 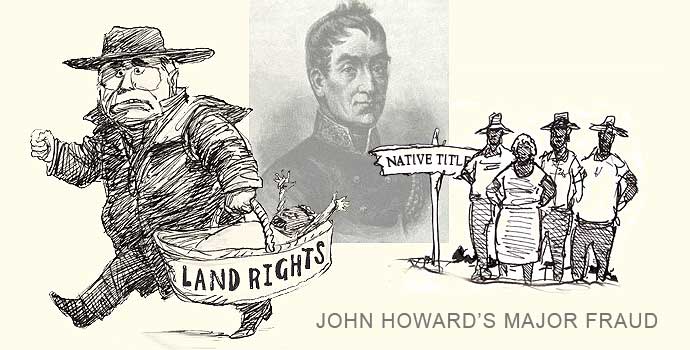 It is my argument that the Australian High Court in Mabo (No. 2) was wrong to suggest it is too late in the day to correct an internationally recognised wrongful act. This is a case of a thief looking after the thief. It is not natural justice.

For Australian Governments of today to suggest that every form of land title, except Crown land title, extinguishes our Native Title rights is nothing but a lie and a fraud against the public, not to mention Aboriginal Peoples

/>There is now a desperate need for all of us to take stock of this lie because former PM John Howard committed one of the greatest frauds of all time when he amended the Native Title Act in 1998 to illegally grant authority to State governments to enact local Native Title Acts within the States that allege the States had gained a right to a beneficial title to land, despite the High Court ruling otherwise, that is they did not gain beneficial radical title.

But if the land were occupied by the indigenous inhabitants and their rights and interests in the land are recognized by the common law, the radical title which is acquired with the acquisition of sovereignty cannot itself be taken to confer an absolute beneficial title to the occupied land. [para 51]

In order for PM Howard to allegedly confer beneficial title to the States, he had to suspend the Racial Discrimination Act 1975, in order to legislate the Native Title Amendment Act 1998 and permit the States to violate our land rights and to avoid paying compensation for compulsorily acquiring First Nations’ lands. In 2000 the UN condemned this action in response to the Sovereign Union complaints to UN treaty bodies, along with others . The UN CERD Committee responded by condemning PM John Howard’s actions in the Concluding Observations by the Committee on the Elimination of Racial Discrimination: Australia. 19/04/2000

The Committee is concerned over the absence from Australian law of any entrenched guarantee against racial discrimination that would override subsequent law of the Commonwealth, states and territories.

7. The Committee reiterates its recommendation that the Commonwealth Government should undertake appropriate measures to ensure the consistent application of the provisions of the Convention, in accordance with article 27 of the Vienna Convention on the Law of Treaties, at all levels of government, including states and territories, and if necessary by calling on its power to override territory laws and using its external affairs power with regard to state laws.

8. The Committee notes that, after its renewed examination in August 1999 of the provisions of the Native Title Act as amended in 1998, the devolution of power to legislate on the “future acts” regime has resulted in the drafting of state and territory legislation to establish detailed “future acts” regimes which contain provisions further reducing the protection of the rights of native title claimants that is available under Commonwealth legislation.

Previously in 1999 the CERD had concluded:

3. The Committee recognizes that, within the broad range of discriminatory practices that have long been directed against Australia’s Aboriginal and Torres Strait Islander peoples, the effects of Australia’s racially discriminatory land practices have endured as an acute impairment of the rights of Australia’s indigenous communities.
[ CERD Decision 2 (54) on Australia : Australia. 18/03/99 ]
In real terms this meant that Aboriginal Peoples are now owed hundreds of millions of dollars in compensation, which we are yet to claim, as well as the claim of ownership of all our lands. There are no land laws or legitimate processes in this country that legitimately take away our land title under our Law and Culture. This can only be achieved by negotiation with any respective First Nation prepared for forfeit land.

/>John Howard’s Indigenous Land Use Agreements (ILUAs) is another illegal method by which English semantics are used to confuse our Peoples. An ILUA tricks you to ‘surrender’ all your legitimate claims to land within the claimed areas and First Nations Peoples are asked to legitimise the original land and resources theft without anyone understanding that is what the ILUA process is doing. Additionally, in an ILUA, signatories are authorising future acts thereby forfeiting the right to negotiate and right to compensation. Native Title lawyers and governments are committing a major crime against our Peoples by providing incorrect legal advice and working to mislead you of your true inherent rights.

We know this ILUA process is illegal but lawyers, white or black, in this country are not prepared to tell our Peoples of this illegal and deceitful regime.

It is illegal because in all contractual arrangements if a signatory party is not fully informed of the true nature of the terms and outcomes of the contract then the contract is voided, because the people have been misled, misinformed and not made aware of the content in terms of the true intent and purpose of the ILUA.

These ILUAs recognise that you are the ‘Traditional Owners’ to the country claimed but then you forego all your rights and thus grant a beneficial title to the government and the occupiers of your land, when in fact the High Court ruled in Mabo (No. 2) that the Crown did not gain a beneficial radical title. Thus the process of ILUAs is in fact completely void and totally illegal.

If we are to be successful in our future survival, wellbeing and maintenance of the oldest cultures on earth, then we must act without any hesitation to claim all our sovereign inherent rights which we are entitled to. Some Nations are doing this through UDIs, Unilateral Declarations of Independence.

If, however, you take an assimilated approach then your only chance of limited justice is to lodge a claim like non-Aboriginal property owners would do to seek compensation under their colonial regime, that is, it is a constitutional right to be compensated for any loss of land through section 51 (xxxi):

“(xxxi) the acquisition of property on just terms from any State or person for any purpose in respect of which the Parliament has power to make laws;”

Whereas under our Law and culture we own the lot and if the government wants to hold a title to it then compensation is a necessary requirement, if a respective Nation seeks to negotiate away any portion of their land. 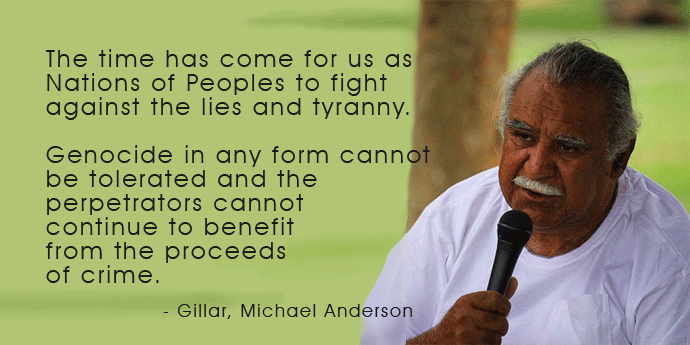 The fact that Australia continues gross Human Rights violations and continuing genocidal policies and operations against First Nations Peoples, makes it absolutely necessary for us to campaign against Australia in the international community because Australia is indeed a failed State.

The time has come for us as Nations of Peoples to fight against this lie and tyranny. Genocide in any form cannot be tolerated and the perpetrators cannot continue to benefit from the proceeds of crime.

It is our intention to present the declaration Usurpation as Genocide to the Governor-General at Government House, Canberra on 26th January 2017. Usurpation as Genocide sets out the gruesome detail how Britain, the British descendants and Australian immigrants have and are benefitting from the proceeds of crime.