by C. Doran, and T. Anderson 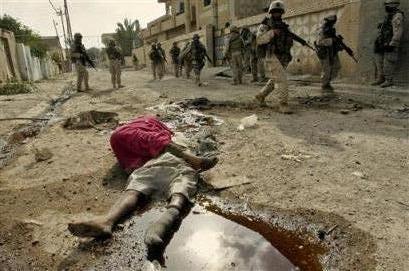 This is the second installment from the article, “Iraq and the case for Australian war crimes trials” called Australian responsibility: the assault on Fallujah from the journal, Crime, Law and Social Change and is posted with permission of the authors, Chris Doran and Tim Anderson.

Australian responsibility: the assault on Fallujah

A second case providing detailed evidence for the war crimes prosecution of Australian officials is their direct responsibility for the brutal assaults on Fallujah in late 2004. There are numerous and well documented accusations of war crimes committed under the direct command of Australian Major General Jim Molan. Noam Chomsky (2006) describes these allegations as ‘far more severe than the [Abu Ghraib] torture scandals’ [20: 73].

Molan was seconded from the ADF to US Forces in April 2004, and served as the coalition’s Chief of Operations through 2005. He was the third highest ranking coalition military officer in Iraq, and was responsible for planning and directing the coalition’s overall ‘counter-terrorism’ operations. He had direct command of 140,000 coalition (nearly all US) and 130,000 Iraqi troops [64]. In an August 2005 feature article, the Australian newspaper reported that Molan ‘ran all military and non military operations at the strategic level for all forces, Iraqi and coalition, across Iraq, including the bitter fighting last year for Najaf, Fallujah, and Samarra.’ The article emphasises that Molan not only planned, but also directed, the late 2004 assault on Fallujah [86].

The US-led coalition had previously attacked Fallujah in April 2004. There is no evidence to suggest that Molan was directly involved in this attack. The second assault, codenamed Operation Phantom Fury, like the first, was to clear out suspected Sunni insurgents who were allegedly using the city as a base for attacks on coalition troops. Citizens were instructed to evacuate the city, population 250,000, before the attack began, but men aged 15 to 45 were prohibited from leaving [41]. Many family members chose to stay with their fathers and brothers. Once the bombing began in October 2004, all exits out of the city were sealed off. An estimated minimum 30,000 to 50,000 civilians were then trapped in Fallujah when the coalition assault began [36, 60].

According to the Washington Post, ‘electricity and water were cut off to the city just as a fresh wave of [bombing] strikes began Thursday night, an action that US forces also took at the start of assaults on Najaf and Samarra’ [85]. The Red Cross and other aid agencies were also denied access to deliver the most basic of humanitarian aid- water, food, and emergency medical supplies [51]. The UN’s Special Rapporteur on the Right to Food, Jean Ziegler, later said the coalition was using ‘hunger and deprivation of water as a weapon of war against the civilian population [in] flagrant violation’ of the Geneva Conventions [71].

Cutting off water, electricity, and denying access to humanitarian aid is prohibited in Article 54 (Protocol 1), of the Geneva Conventions: ‘Starvation of civilians as a method of combat is prohibited. It is prohibited to attack, destroy, remove, or render useless objects indispensable to the survival of the civilian population…’ [34]. 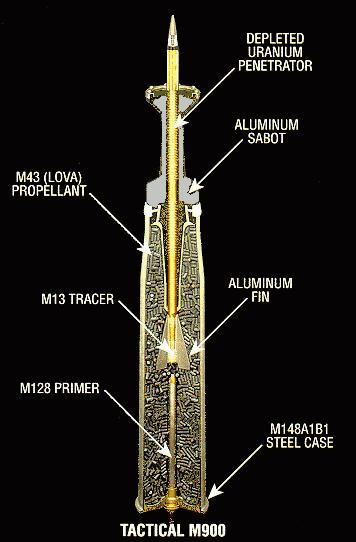 On November 7, the coalition launched the ground campaign by seizing Fallujah’s only hospital. A New York Times front page story stated that ‘patients and hospital employees were rushed out of the rooms by armed soldiers and ordered to sit or lie on the floor while troops tied their hands behind their backs.’ The story also revealed the motive for attacking the hospital: ‘The offensive also shut down what officers said was a propaganda weapon for the militants: Fallujah General Hospital with its stream of reports of civilian casualties’ [65]. The city’s two medical clinics were also bombed and destroyed. Independent US journalist Dahr Jamail (2004, 2005) interviewed scores of Fallujah survivors after the assault [49, 50]. He documented eye witness accounts of American troops denying the Red Cross entry to Fallujah to deliver medical aid, and firing on ambulances trying to enter the city. Article 8 of the Geneva Convention (Protocol 1) strictly forbids attacks on hospitals, medical emergency vehicles and any impeding of medical operations [35].

Further purported war crimes occurred when US and Iraqi troops entered Fallujah. Jamail reports firsthand accounts of US snipers shooting women and children in the streets; unarmed men shot while seeking safe passage with their wives and children under a white flag; and photographers shot as they filmed battle [49, 50]. And in images beamed around the world on November 9, a US marine was shown to approach a wounded man, fire, and move away, saying ‘He’s done’ [7]. Other accusations of serious atrocities committed under Molan’s command are indicated by evidence from the US military. Chemical weapons were used in the attack on Fallujah. US soldiers wrote in a military journal that white phosphorous (wp) was such ‘an effective and versatile munition’ that the military ‘saved our WP for lethal missions’ [42]. After repeated and strenuous denial that the US had used white phosphorous, US Colonel Barry Venable admitted on November 15, 2005 that, ‘Yes, it was used an incendiary weapon against enemy combatants’ [45]. In a November 2005 editorial denouncing its use, the New York Times described white phosphorous: ‘Packed into an artillery shell, it explodes over a battlefield in a white glare that can illuminate an enemy’s positions. It also rains balls of flaming chemicals, which cling to anything they touch and burn until their oxygen supply is cut off. They can burn for hours inside a human body’ [63].

It was Saddam Hussein’s use of white phosphorous on Kurdish rebels that was one of the primary justifications for the invasion. Protocol III of the UN Convention on Certain Weapons Which May Be Deemed to be Excessively Injurious or to Have Indiscriminate Effects (1980) bans the use of incendiary weapons against military targets in areas with a concentration of civilians. The Protocol has been signed by 94 countries, including Australia, but not the United States [72, 83]. Relatively few insurgents were found once the city was subdued; most had fled the city long before the assault began [20: 110]. Meanwhile an estimated 70% of the city was utterly destroyed, with thousands dead [48].

As addressed earlier, government and military officials can be held liable for war crimes committed under their command as per Article 28(a) of the Rome Statute of the International Criminal Court if they ‘either knew or, owing to the circumstances at the time, should have known that the forces were committing or about to commit such crimes’ [82]. The consistency and similarity of the attacks at Najaf, Samarra, and Fallujah display a deliberate disregard for civilian casualties in the planning and implementation of those military assaults. By Molan’s own admission, he was responsible for not only planning, but also directing, these attacks [62]. It is not conceivable that Molan was unaware of the serious and well documented accusations of war crimes being committed under his command, many of which were being reported in international media at the time. The same applies to the senior Australian ministers to whom Molan was directly accountable: former ADF Chief General Peter Cosgrove and former government ministers including Defence Minister Robert Hill, Foreign Minister Alexander Downer and Prime Minister John Howard. Molan and these officials should be tried for war crimes, particularly for alleged violations of the Geneva Conventions detailed above, and as specified in the Rome Statute of the International Criminal Court.

The assault on Fallujah did not end with the city being militarily subdued in late 2004. An extensive peer reviewed study released in July 2010 found higher rates of cancer, leukemia, and infant mortality in Fallujah from 2005 to 2009 than corresponding rates for survivors in the years following the atomic bombs dropped on Hiroshima and Nagasaki in 1945. The epidemiological study, ‘Cancer, Infant Mortality and Birth Sex-Ratio in Fallujah, Iraq 2005–2009,’ was published in the International Journal of Environmental Studies and Public Health. Its examination of 711 houses and 4,843 individuals revealed a four-fold increase in cancer rates since the coalition assault. The types of cancer were similar to the cancers resulting from radiation fallout at Hiroshima and Nagasaki. The study also found heightened levels of birth defects, and infant mortality rates of 80 deaths out of 1,000 births; eight times higher than neighbouring Kuwait. Leukemia rates were 38 times higher, cancer in children 12 times more frequent, breast cancer 10 times more common than in nearby Arab countries of Jordan, Egypt, and Kuwait [18]. 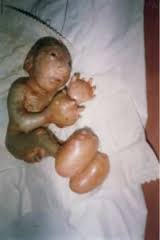 Lead author Dr. Chris Busby, professor of molecular biosciences at the University of Ulster (UK) said, ‘To produce an effect like this, some very major mutagenic exposure must have occurred in 2004 when the attacks happened’ [21]. In a separate interview, he said ‘My guess is that this was caused by depleted uranium. They must be connected,’ although he emphasised that it could not be certain without further research and independent analysis of samples from the area [28].

The US military has long been condemned for its use of depleted uranium. Depleted uranium is twice as dense as lead, making it ideal for use in armour piercing bullets and shells. Once the shell or bullet makes contact, up to 40% of the uranium is released as a very fine radioactive dust that can be carried for miles by wind and inhaled by human beings, or is deposited in the ground. Depleted uranium has been linked to Gulf War Syndrome and other significant health issues of US military veterans who served in the first Gulf War. It has been linked to significant increases in the types of cancer in areas where it was deployed in both Iraq wars, but such links are difficult to prove and the medical community remains somewhat divided as its effects [14]. While technically not banned as a weapon of war, its use in civilian areas could constitute a war crime similar to the use of cluster munitions in areas of civilian populations. While the US has admitted to the use of depleted uranium in Iraq, it is not clear whether depleted uranium weapons were used in the assault on Fallujah [46].

officers to journalists in Canberra, March 20–April 22, archived at: www.defence.gov.au/opfalconer/

3. Agence France-Presse. (2003a). ‘Amnesty blasts cluster bomb use after suspected attack in Iraq’, 3

4. Agence France-Presse. (2003b). ‘Britain’s Diana fund condemns ‘appalling’ use of cluster bombs in

7. Amnesty International. (2004). ‘Document-Iraq: Fears of serious violations of the rules of war in

11. Associated Press. (2003). ‘Iraqis report 43 civilians killed in and around Aziziyah as US troops

14. Bertell, R. (2006). Depleted uranium: All the questions about DU and gulf war syndrome are not yet

19. Center for Constitutional Rights. (2010). ‘Universal jurisdiction: The case against Rumsfeld and

Commonwealth of Australia. Schedule I of the security legislation amendment (terrorism) Act 2002

31. Gallagher, K. (2009). ‘Universal jurisdiction in practice: Efforts to hold Donald Rumsfeld and other

powers of detention, proscription and control. Australian Journal of Politics and History, 49(3), 355–

72. Reyhani, R. (2007). The legality of the use of white phosphorus by the United States military during

80. United Nations. (2009). ‘Multilateral treaties deposited with the secretary general, status as at 1 April

2003). Article 28 can be found here: http://untreaty.un.org/cod/icc/statute/romefra.html

83. United Nations. (1980). Protocol III of the convention on certain weapons which may be deemed to be

excessively injurious or to have indiscriminate effects