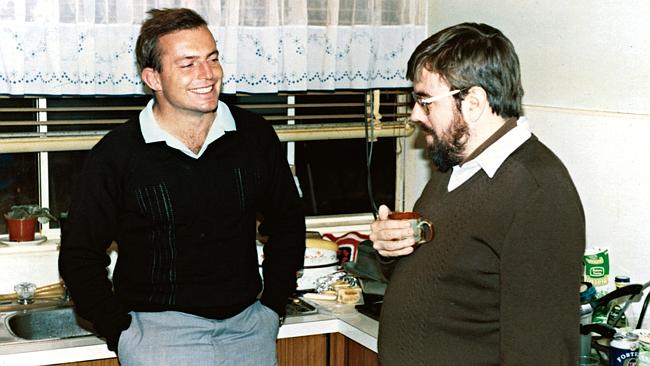 A four part review of the media reception of Greg Sheridan’s book “When we were Young
and Foolish”. (Allen & Unwin 2015)

….by someone who was there before and after….Jefferson Lee

As a slightly older left-wing contemporary “Young and Foolish” student to Greg Sheridan, (and his “best mate” Tony Abbott), in their 1970s student hey days, I read this book with great interest. On the plus side for Sheridan, it is a very candid and revealing book. It confirms that the ‘Cold Warrior’ secret police in Australia through ASIO worked very closely, almost hand-in-glove, (confirmed by Patrick Morgan in the Weekend Australian 1-2/8/15),  with their ideological pro-American foreign policy counterparts in the Santamaria-NCC network of trade union white-anters and student functionaries. It should be noted that the various “Democratic Clubs” on campus back then were never more than a handful of DLP operatives issuing regular smear sheets (‘Kundu’ at UNSW), invariably designed to divide and confuse while promoting a pro-USA imperialist view of the world that celebrated Australia as a vassal and servile puppet of the pro-USA global war machine. A reactionary, but well-resourced minority they were indeed. Sheridan, Abbott and their fellow energetic, but still reactionary, never “radical”, crusaders they now purport to have been! These revelations make Sheridan’s book far more useful than the Latham and Costello student days chapters in their respective memoirs.

From the late 1960s to the 1980s hundreds of thousands of my generation of ‘ordinary’ students took to the streets in mass protests
and invariable came up against a violent and corrupt police force and equally corrupt political establishment.  Many students were bashed by police and even army thugs on occasion (remember Adelaide’s Moratorium march, anyone?). Political dossiers and inaccurate files were concocted by every State Government Special Branch, ASIO and their NCC student informers. Files were created on hundreds of thousands of young idealistic people. They were and still are used to deny employment to the public sector and private industry alike! Some students were bashed in police cells. Some were raped. ‘National U’ ran a testimony by a pacifist non-complier with Conscription who was deliberately put in a cell with macho-sadists crims who gang-raped him in 1972. Leaked police files cost Melbourne teacher Ken White his teaching job in a Catholic school in 1975. A police dossier had homosexual teacher Greg Weir dismissed from his teaching job in Brisbane in 1976. Shortened media memories obliterate a generation of struggle with each glib Sheridan media grab for his new book.

For the above and other reasons the NCC student lobby in the early 1970s were detested by many students. As for student violence, it was usually self-defence against police attacks on non-violent protesters that the mainstream media took delight and calling the opposite. Of course there were exceptions. And it was true the Left press called for “class struggle to defend worker’s rights”. But the Sheridan book ignores police violence and state repression as if it didn’t exist. Even more so, the violence and provocation from his own camp as well. He acknowledges only in passing, the “full time NCC student organiser Frank Lane-Mullins”. He says nothing about  this man’s throwing of a CMF Army issue phosphorus smoke bomb into a crowded lecture theatren (CLB7, Morven Brown Building, UNSW, 1974) to disrupt a public meeting on the Vietnam War issue. Mass panic ensued and over 200 students had to be evacuated. There were many other examples, tyre slashings, burning of student newspapers, etc, mainly events before Tony and Greg arrived on the late 1970’s more subdued campuses. As Peter Craven in the Weekend Australian Review (01/08/15) on the Sheridan book pointed out, the Moritorium era generation had graduated by the late 1970’s and Abbott and Sheridan were too young to understand how they had ‘missed the Revolution’. The anti-Vietnam War student era was one you had to live through to understand the bitterness and anger caused by State-directed brutality to many on the student and anti-war Left.

State power was epitomised by NSW Premier Askin’s ‘Ride Over The Bastards!’ media headline in response to peaceful anti-Vietnam War protestors sit-in blocking the LBJ cavalcade in the late 1960s and this disgust was compounded with corrupt politicians denying links with gambling kick-backs and illegal casinos and hypocritical censorship laws. All this undermined respect for authority with Conscription and an undeclared war in Vietnam as a backdrop. Political corruption is one stain that remained constant, beyond the fall of Saigon in 1975, that Sheridan conveniently glosses over in his so-called memoir of the political experiences of his youth. Organised Crime and political corruption were synonymous from then to now. A tradition maintained in NSW by alleged “brown paper bags” in The National Times during the Wran era that Sheridan’s mates Carr and Unsworth were no doubt involved in hushing up. A tradition that continues right up to the recent ICAC era and now the latest NSW clubs and liquor industry affair involving “political donations” through Federal Liberal Cabinet Minister Kevin Andrews.

Bjelke-Peterson and the Queensland Royal Commission into Police Corruption and the violent attacks on students “Right to March” may also explain some of the Monash Conference hostility to one John Herzog who had strong links with the perpetrators of that violence where hundreds of freedom loving students were ruthlessly bashed in public with no effective legal or political comeback for over a decade until Whitrod pulled the plug with the Royal Commission into the “Moonlight State”. (Remember the hundreds pushed over a steep wall into a park for a second bashing during the 1971 Queensland “State of Emergency” during the Springboks Tour protests, Greg?, Not Likely!) Sheridan gives the tall and solidly built mid 30s John Herzog the image of an innocent teenage student in his book. He was a long-standing political operative who stood over the undergraduates within his Queensland student office by all reports emanating from fellow student delegates to the Monash Conference at the time.

Let’s look at the other student legacies Sheridan conveniently overlooks in his a historical book. Apart from the public funding of education and tertiary fees perennials, historically, the student campaign issues,- ranged from human rights and later Land Rights for Aboriginals, (from the ‘Freedom Ride’ in 1965 to the ‘Tent Embassy’ in 1972), the Anti-Apartheid Movement, from ‘Sharpville Massacre’, to ‘Stop the Tours’ and whites-only political football in1969-71, to ‘Free Nelson Mandela’ in the 1980s as the effectiveness of the Boycott Apartheid global movement kicked in. The mass Moritoriums against the Vietnam War, exemplified by student reaction to the Mai Lai massacre and Lt Calley in 1969, the B-52 carpet bombing of Laos and Central Vietnam, the CIA funded and directed Phoenix Program for assassination of thousands of civilians suspected of having pro-Hanoi sympathies, the torture cages of Con Son island, Nixon’s secret war in Cambodia, Watergate, Kent State, Pentagon Papers, the injustice of Conscription, the legacy of Agent Orange where up to four million mutations in child birth now reaches genetically into the fourth generation of Vietnamese born even today! None of this gets a run in Greg Sheridan’s memoir, with his “long hair and beard” disguise during his misnamed “radical” student days.

As an aside, on my undergraduate campus at UNSW in 1971, stopping the billionaire hustler Daniel K. Ludwick’s US multi-national owned Clutha Mine and the proposed off-shore Coal loader near Stanwell Beach on the NSW South Coast was an issue. The environment was important. So too defending the dozens of normal, average young Catholic students from being expelled from the Opus Dei clerical fascists who were running the repressive Warrane College where any articles critical of religion or referring to sex were chopped out of the daily papers before the papers were allowed to be put in the student common room. Students were expelled for taking the crucifixes down in their bedrooms even though it was not a “religious only” college. Both these “mass issues” involving thousands of students of the “Whitlam Generation”.

The legacy of those battles remain. Environmental protection of our pristine coastline, from foreign predators from the Great Barrier Reef recent oil spillages to destruction of sacred sites in W.A. Burrup Peninsula (eg ‘Background Briefing’ program) still goes on with the Sheridan Australian newspaper columns blessing of development at any cost. Meanwhile his mates in Opus Dei spread their octopus tentacles as they did in Franco’s Spain and Pinochet’s Chile supporting sexual repression and economic inequality in the name of “family values” and “god”. A  NSW Liberal Party Minister with Opus Dei affinity campaigns against “gay marriages”. Another plant in the Liberal Party is exposed for branch stacking Young Liberal and party branches. History shows Warrane College “oddies” has moved on from religious proselytising to political proselytising the new generation of young and naive Catholic students.

Sheridan’s recent feint-to-the-left offering as an anti-censorship ‘libertarian’ on the ABC-TV ‘Q & A’ show over free speech for
journalists and refugee case workers on Manus and Nauru Islands was picked up by Media Watch, no doubt to embarrass Abbott?) were clearly a cover given his position on other issues? Perhaps a quick quip to boost book sales from the pro-refugee progressives a cynic may say? The Sheridan hard-line support for ASIO’s on-going cold warrior-style “war on terror”; where legally secretive negative assessments on refugees and unjust deportations are made, on security grounds they claim, hiding the racist and political bias. Or doors bashed in and kids harassed at gun-point over some provocative Muslim teenager Facebook bragging, (although others have confessed and been tried of offences I will concede, up to a point. The rider being how fair are the trials?). As for free speech? Sheridan never says anything but praise for Singapore’s Lee Kuan Yew despite his banning of all media criticism and locking up or suing all political opponents for merely stating their case! Yeah a real free speech boy our Greg! No wonder the Libs wanted to appoint you as High Commissioner there!

All this speaks volumes on Sheridan’s biographical ‘hand-wringing’ over his campaigning for Australian entry of Indochinese boat people in his student days of the mid to late 1970s. The West’s refusal of reconstruction reparations agreed to under the Paris Peace Accords don’t figure in his analysis or concern. No Marshall plan here for 60 million plus post-war Vietnamese. Just economic embargoes. Among the genuine refugees escaping the aftermath of war, Paris-Match war correspondent Rena Briand (who adopted and raised ‘war orphans’ here in Australia) recognized more than a handful of police torturers and army generals from the long discredited Thieu regime aboard the two ships unloading in Hong Kong and resettled in Australia in mid 1975. Many of these had blood on their hands. Some came here and developed links to the heroin trade. Having worked with the Indochinese community in Sydney personally in combating the violent anti-immigrant and neo-Nazi ‘National Alliance” (funded by the pro-nuke, pro- Oz Atom Bomb, Sir Phillip Baxter) I refuse to generalise. Lest I be misunderstood here by Sheridan, I knew first-hand how Australia welcomed ‘war criminals’ from Indochina as well as persecuted ethnic and religious people from Indochina, who indeed became ‘good citizens’, albeit diehard anti-communists. I even know Lao refugees who went back to fight against the Lao Communist Government as mercenaries after settling here as refugees. But concern for Vietnamese boat people then, does not survive to theSheridan line on refugee boat people today? Or does it? He claims in one interview to have backed Gillard’s “Malaysia Solution”. A far cry from welcoming Indochinese boat people with open arms indeed, Mr Sheridan.