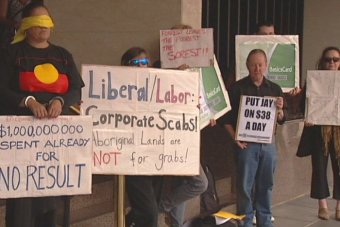 Protesters rallied outside the South Australian Labor Party convention in Adelaide on November 15.

The report’s proposals went beyond the narrow terms of reference — employment and training for Aboriginal people — to include policy recommendations around welfare reform, school attendance, land rights, early childhood and prenatal services, and other areas.

Many of his proposals are intended to apply to non-Aboriginal people as well.

Kaurna elder Christine Abdulla told the protest that neither Forrest nor Weatherill have properly consulted with Aboriginal communities and have little understanding of the kinds of challenges they face.

She said Weatherill decided to endorse the Forrest review before he started consulting with affected communities and therefore these consultations cannot be taken seriously.

Australian Education Union research officer Mike Williss told the rally there was little evidence that cutting Family Tax Benefits for parents whose children do not attend school will lower truancy. But it could damage critical relationships between families and schools.

Radical historian Humphrey McQueen said that people on low-incomes are usually the best money-managers, not the worst — because they have no choice — and that the Forrest review, with its extreme proposals, is shifting the political debate further and further to the right, even though much of the report probably will not be implemented, at least for now.

Nadine Schoen from the First Nations’ Advocates said the report’s true agenda was to continue the bipartisan drive to move Aboriginal people out of their remote communities into regional centres, making it easier for mining companies and other business interests to exploit their lands.

She said there was a connection between Forrest’s proposals to lift rents for housing in remote communities to 80% of market rates as an “incentive” for Aboriginal people to relocate for work, his call for private rather than common ownership of land, which will make it easier for outside interests to negotiate with communities, and the announcements by the federal government and governments in Western Australia and South Australia that they will no longer be able to fund remote communities.

The protest coincided with the passing of a motion by the Labor convention, condemning Weatherill’s support for Forrest’s report.

The motion, which was very widely supported by delegates, and sponsored by the SA branches of the Australian Services Union, the Community and Public Sector Union, the Maritime Union of Australia, and the Rail, Tram, and Bus Union, said: “Convention opposes the Weatherill cabinet’s rushed embrace of the Forrest report.

“Of note, Convention is concerned with the advocacy of financial penalties for welfare-recipient parents as a means of improving school attendance; its attack on TAFE funding and its replacement by vouchers that would only fund employer-approved courses; its call to block cash payments for welfare recipients via the Healthy Welfare Card; and its bland acceptance of increased crime in the community that will flow from the implementation of its recommendations.

“The rushed support of the Forrest report has been made without consultation with the Aboriginal people whose lives will be affected and is contrary to Labor values.”

Prime Minister Tony Abbott and Labor leader Bill Shorten have refrained from endorsing all 27 of Forrest’s proposals, but Weatherill gave the report “the broadest possible support”.

The backlash since then has forced him to backtrack from his original position, though he remains supportive of much of Forrest’s suggestions.

Weatherill told the ABC: “Our proposition is to fundamentally deal with remote Aboriginal communities first. It’s not our intention to extend this into the metropolitan area.

“Income management is a difficult issue but we need to realise that welfare, just handing money over, has created dependencies and some pretty awful outcomes in not just Aboriginal communities but across our whole nation.”

His view is the tired old one that access to cash income support payments has been the source of a range of problems, from alcohol and drug abuse, to poor mental and physical health, to unemployment.

This argument confuses welfare with poverty. It is not access to Centrelink payments but grinding poverty, the lack of economic and social prospects, and feelings of demoralisation and disempowerment, that cause substance abuse and other forms of dysfunction.

It is incorrect to suggest that the very limited, meagre safety-net that income support recipients access, rather than broader economic and social problems — and for Aboriginal communities, the historical and ongoing legacies of dispossession – is the source of these problems.

In remote communities, there is not only an enormous shortage of jobs, but most of the government funding to these communities is directed to white-controlled non-government organisations and government agencies. Locals have little control over the design of services and how funds are spent.

The best community and health programs are those designed and implemented by local communities, in partnership with governments. Numerous Closing The Gap reports have argued this, as social policy commentator Eva Cox noted in her critique of the Forrest review.

Self-determination is a principle that is not only necessary and just but is critical to well being for individuals and communities. The sense of control over one’s circumstances is one of the social determinants of physical and mental health, according to the World Health Organization.

This idea is scarcely acknowledged in Forrest’s report, which, despite stating that “it’s time to end the paternalism”, seeks to expand the heavy-handed schemes of former Coalition and Labor governments.

As Yindjibarndi Aboriginal Corporation CEO Michael Woodley said: “Andrew Forrest is replacing government welfare with mining welfare, which in effect creates native welfare all over again. This is because Aboriginal people will still not have the sovereignty over their land and the autonomy over their communities and destinies.”