On November 8 a national protest was held against the TPP in major cities around Australia. At the Adelaide rally statements by SA Unions, Greens Senator Penny Wright, the Greens Member of the Legislative Council Mark Parnell and Senator Nick Xenophon were read out. All the statements argued the case of what dangers the TPP poses for the Australian people. See below for the statements. 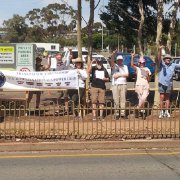 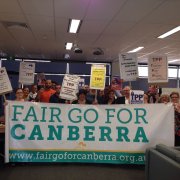 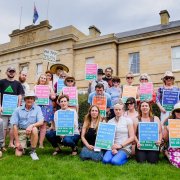 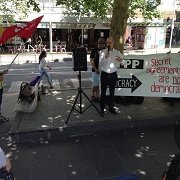 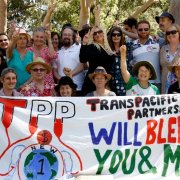 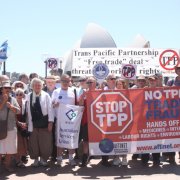 SA Unions commends today’s protest against the Trans Pacific Partnership. The TPP represents a fundamental attack by big US corporations on the rights of the Australian people.

The investor State Dispute Settlement provisions place the rights of multinational corporations before those of sovereign states. It will remove enforceable labour and environmental standards and prevent governments at all levels from preferencing local over foreign business, sending more of our jobs and money overseas.

It will undermine the Pharmaceutical Benefits Scheme and reduce our access to cheaper medicine. Finally, the negotiations are conducted in secrecy. Wikileaks has defied the US monopoly on information to provide us with our only real information about the TPP.

Continue the fight against the TPP!

Greetings to everyone gathered there today to stand against the Trans-Pacific Partnership — the biggest trade deal in Australia’s history — and ISDS clauses. The secrecy that surrounds this agreement is totally unacceptable, as is the fact that corporations have seen sections of the text and are lobbying to effect changes that will be of benefit to them. This agreement may put our PBS at risk, attack internet freedoms and seriously threaten our sovereignty.

We cannot simply stand by and watch this government secretly trade away whatever they, and the big corporations, choose. The Greens will keep speaking out about the TPP in the Parliament and community. We will never support this government’s moves to trade away our sovereignty. Thanks for taking action and raising your voice on this crucial issue.

As I’m often reminded, the world is run by those who turn up. I’m sorry I can’t be there today. I’m very grateful to you all for taking a stand.

As we know Bureaucrats and Ministers have met in Canberra and Sydney, in secret, to trade away the National Interest. The Trade Minister, Andrew Robb, does not even believe that Australians have the right to know what he is trading away.

The US Government is at least giving their legislators information about what is in the TPP, whereas the Australian government is not.  We don’t know fully know what this agreement means, we don’t know how badly we could be impacted.

In the TPP, nothing is off limits.  We could see medicine becoming more expensive and our public broadcasters – including the ABC and SBS – could be under threat.  And that’s only the tip of the iceberg.

It is rallies, just like this one, which tell the Government that we are angry, that we don’t trust them and that we will not sit idly by and let them take Australians for granted.

I can’t be here with you today, because Greens MPs and members from all over the country are meeting in Canberra this weekend to discuss this and other crucial issues for our democracy.

You can rely on the Greens to lead the debate in our national and State Parliaments against the Trans-Pacific Partnership.  Congratulations for taking a stand today!

I’m sorry I can’t be at this rally today but I am with you on this issue 100 per cent. The Trans Pacific Partnership is shaping up as a new low in Australia’s very poor record infree trade agreements.

Both of Australia’s major parties have let the country down in their pursuit of free trade deals over the past decade. Negotiated in secret and announced like political trophies, these deals rarely live up to the hype, and evidence shows they actually harm our trade performance with partner countries.

That is why I will be drafting legislation that reforms Australia’s approach to these agreements, bringing them out into the light, exposing them to independent cost-benefit analyses and proper scrutiny by the Parliament. We should only enter into these agreements if there is a clear, independently verified, benefit to Australia.

Too often do we blunder into them based on little more than blind faith in free trade. We have become known in some trade circles as the “free trade Taliban” for this very reason.

A key issue in the Trans Pacific Partnership negotiations is Investor State Dispute Resolution clauses – surely one of the worst ideas to gain traction in world trade in recent decades. How Australia could contemplate signing away our sovereignty to the tender mercies of foreign tribunals is beyond me.

It is not known what trade-offs will be made in the next month to secure this deal. Only time will tell the damage caused in trade imbalances, lost jobs and industries closed down as a result.

This year Toyota Australia cited the Australia-Korea free trade deal in explaining why it was ceasing manufacturing in Victoria. We need to reform our approach to these free trade agreements to bring common sense back to the table.

Good luck with this campaign and I look forward to working on this important issue in coming weeks and months.