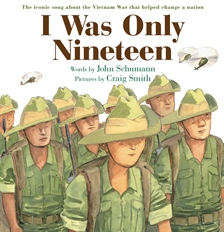 A new illustrated book of John Schumann’s lyrics about the battlefield’s real legacy of wars encourages young Australians to contemplate the futility of war.

Fantastic lyrics, music and now a picture book for all ages. Everyone should know about these lyrics, the period it’s set in, and the wonderful John Schumann and the Redgum band.

The theme is timeless and universal, as relevant today as it ever was – timely for the ANZAC commemorations, exposes the truth about Australia’s involvement in foreign imperialist wars – first the British and now the US.

The World War One centenary will see children in Australian schools taught many stories about our country’s military history and associated superhuman courage and sacrifice.

However they are unlikely to learn about the disturbing, ugly truth that war horribly kills people and scars for life those who survive the horror.

Children will definitely not be told that war is really about ‘robber-barons’ annexing territory and capturing your enemies markets and valuable resources.

Rather war is white-washed today with the sophistry, ‘to defend our way of life’ and ‘preserve our democracy’ and in the past the youth were imbued with imperial patriotism that exhorted ‘for King and Empire’.

The Anzackery – that the Gallipoli battle created our national identity – is dealt a sobering and jarring jolt by Schumann’s defining song, I was only Nineteen.

Schumann’s words, “And the Anzac legends didn’t mention mud and blood and tears. And stories that my father told me never seemed quite real,” shatter the Anzac mythology with the gory mess that is war.

The song’s lyrics convey the story of Frankie who went from drinking tinnies in the Grand Hotel in Vung Tau to lying screaming in the jungle and waiting for the morphine.

Then the song leaves the battlefield and coldly describes what returned soldiers will confront after their duty of war – affliction with post-traumatic stress – a pervasive condition amongst veterans of all wars which the politicians and the military still have not fully accepted and acknowledged.

In Schumann’s children’s book, “I was only Nineteen” the narrator is a grandfather who is telling his grandson about his Vietnam experience, while dealing with the lingering health and emotional legacies of service.

Illustrated by children’s book artist Craig Smith, it candidly depicts the soldiers’ battlefield experiences, including the moment when “Frankie kicked a mine” on the day of the first moon landing: 20 July 1969.

The hope for Schumann is that this children’s book iteration of the song for kids will help future generations from making the same mistakes as past generations.

The motivation of the book is to encourage children to reflect on what war does to people and for them to decide against getting involved in conflicts we have no part of.

If the book achieves that with children then it will have done its job.

The song and the new book are Australia’s cultural treasure that we should promote and be proud of.

Reject Australia’s involvement and support for US military policies and wars. An independent Australia with an independent foreign policy will guarantee peace and security.