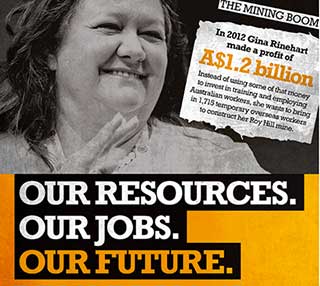 The Queensland and Western Australia branches of the Construction Forestry Mining Energy Union (CFMEU) launched a national advertising campaign, in Brisbane and Perth on January 28th, to demand a greater share of the mining boom. The campaign focuses on maintaining jobs for Australian workers, more investment in mining communities and improved management of the impacts on manufacturing and construction.

The campaign is called, “Let’s Spread it Around” and focuses on the stories of four Australians and how the mining boom has impacted on them. The CFMEU launched a dedicated website to provided facts about what is really happening in the mining industry and what the mining monopolies are up to. The site address is: www.letsspreaditaround.com.au.

Below is information from the “Our Campaign” page of the Let’s Spread It Around website. Please support their email campaign.

Whilst the mining industry is creating vast wealth for a select few, and decent wages for those lucky enough to get a job in the sector, it is also having a negative impact on many Australian workers and their communities.

Despite what the mining companies want you to think, their profits will remain high for the next twenty years. But these mining magnates, both in Australia and from abroad, are seeking to increase their already large share of wealth from the boom at the expense of the rest of us.

They and other employers are increasing the use of temporary overseas workers at a time when unemployment is rising.

Although 68,000 people in construction lost their jobs in 2012, during the same period the total number of 457 temporary visa workers in the construction industry has risen by 38 per cent. The government uses the excuse of skills shortages but all evidence points to their desire to create a pool of cheap and easily exploited labour for the purposes of driving down our wages and conditions.

Both governments and mining companies are failing to invest in necessary infrastructure in communities, which makes them increasingly unliveable for old and new residents. And the mining companies’ over-reliance on fly-in fly-out workers is putting pressure on mining families and leading to increasing health risks for those workers.

The boom itself has also led to a historically-high Australian dollar, which is hurting other industries. The high dollar makes our exports expensive and creates an incentive to import cheap and often inferior products. Manufacturing jobs are under huge pressure. Last year 52,000 workers in manufacturing lost their jobs.

The CFMEU believes that this once in a lifetime opportunity must deliver jobs, investment in education and training, and support for critical industry sectors such as manufacturing. Unless this happens we will be left with nothing to show for the boom except empty mines and closed factories. So let’s not squander the boom – let’s spread it around.